Biden after giving his remarks, took questions from reporters and called on Peter Doocy, saying the Fox News White House Correspondent, “always asks me tough questions, and he always has an edge to them. But I like him anyway.”

Peter Doocy asked Joe Biden: “You said within in three weeks or so, we will be at the point where there are a million vaccines a day, but it seems like…”

Biden interjected to tell Doocy that he “misspoke” and meant to say, “I hope we’ll be able to increase as we go along to get to the million-five a day. That’s my hope.”

Doocy followed up with another question, wondering, “Now that you’re president, and you’re saying, ‘There is nothing we can do to change the trajectory of the pandemic in the next several months’– what happened to two months ago, when you were talking declaratively about ‘I’m going to shut down the virus'”?

The Fox News journalist question comes after Biden delivered remarks Friday over his administration’s response to the coronavirus pandemic, saying in part, “there is nothing we can do to change the trajectory of the pandemic in next several months”, asserting that it will take months to turn around the pandemic’s route. Continued Below

Biden responded to Doocy, claiming he is “going to shut down the virus”, but asserted that he “never said he would do it in two months”.

“I said it took a long time to get here. It’s gonna take a long time to beat it,” Biden said. “And so, we have millions of people out there that have the virus.”

“It’s gonna take time. It’s gonna take a heck of a lot of time,” Biden finally admitted. “… We’re in this for a while. What are we now? 410 thousand deaths? And there’s gonna be more. The prediction as I said from the very beginning of the year– after being sworn in, was the predictions were– we’re gonna see somewhere between a total of 600K and 660K deaths before we begin to turn a corner in a major way.” Video Below

WATCH: “He always asks me tough questions, and he always has an edge to them," Pres. Biden says of Fox News' Peter Doocy. "But I like him anyway." pic.twitter.com/IbDT9BXGqH

In October, Biden, however, Biden claimed on Twitter: “Donald Trump still doesn’t have a plan to get this virus under control. I do.” 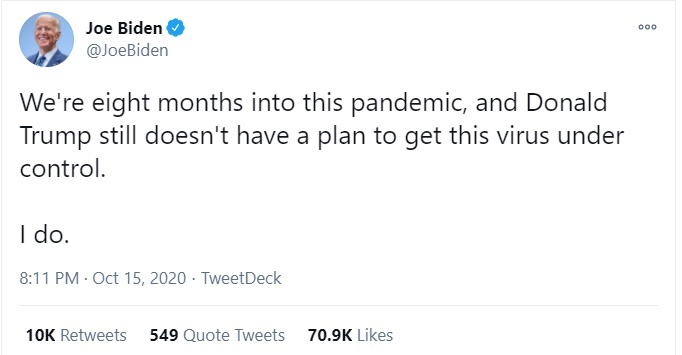