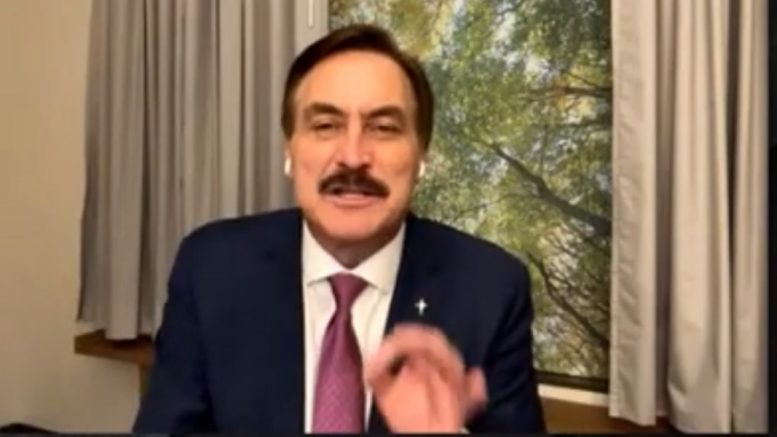 Mike Lindell, CEO of MyPillow spoke with Paul Oebel on “Truth Unveiled” Tuesday, announcing that he is releasing a documentary on Friday of alleged voter fraud, pertaining to the November 2020 presidential election.

“Coming Friday, I have put together this documentary. It’s three hours long that shows 100% the theft by China, these other countries, this cyber attack on our country here that flipped votes,” Lindell stated.

Mike Lindell said that in Antrim County, Michigan where votes were reported to be flipped from Trump to Biden– the case is “still open”. Moreover, a 23-page report was published in December by Allied Security Operations Group after a forensic imaging examination of Dominion Voting Systems machines was completed.

An expert analysis from Russell Ramsland concluded that Dominion’s system “intentionally generates an enormously high number of ballot errors to create systemic fraud and influence election results. … The allowable election error rate established by the Federal Election Commission guidelines is of 1 in 250,000 ballots. We observed an error rate of 68.05 percent. This demonstrated a significant and fatal error in security and election integrity,” as reported by The Freedom Times.

Lindell alleged that the vote-flipping went “all over the country”, adding, “We have cyber footprints. We have access– the government– all this came together over the last two weeks. I’m so excited because this is all gonna come out on Friday, maybe even Thursday. Everyone needs to share it with everyone you know, because anyone that sees this, even if it’s 9 Supreme Court Justices, everyone of them would say, ‘Wow. This is an attack on our country'”.

“We need to stop these communists, because they did it with people on the ground here in the United States. There are bad people here that got in and worked them. This is a takeover of our country. Our chance is this Friday. Once you guys see what I’ve seen, you’re gonna be so excited,” he expressed. Continued Below

“… Come Friday when all this comes out … the whole world is watching this. Everybody is praying for a miracle. Well, it’s coming and it’s coming fast. I don’t know where it goes, but I do know this: each and everyone of you need to take that documentary … get it out far and wide,” Lindell urged.

Asked where we can see the documentary, Lindell said OANN will be broadcasting it and running it in a loop. He also noted, “We’re have gonna links. You go to MichaelJLindell.com. … Believe me, it will be the most important documentary you’ve ever watched in history. And it’s right before the corrupt Senate [impeachment] that they’re doing to our great president, the real president. … Everyone is gonna see this miracle unfold, and our country is coming back to us and it will be one nation under God again.”

“I’m gonna try to get to the president [Trump] and show him this. And now, he’s gonna know that everything he’s been saying– when he walks into those hearings, they’re gonna give him an apology, is where my mind is. … I think God waiting to make this move, because you know what? It’s 11:59. That miracle that’s coming. I want you to pray. I want you to watch this documentary. And I want you to get this out to everyone in this world,” he added. “God’s got his hand in all of this.” Video Below

Mike Lindell’s full remarks; fast forward to the 44:00 mark into the video for his full comments over the upcoming Friday documentary:

(Related: Fitton: “There’s More Than Enough Information” To Warrant An FBI Investigation In The 2020 Election)