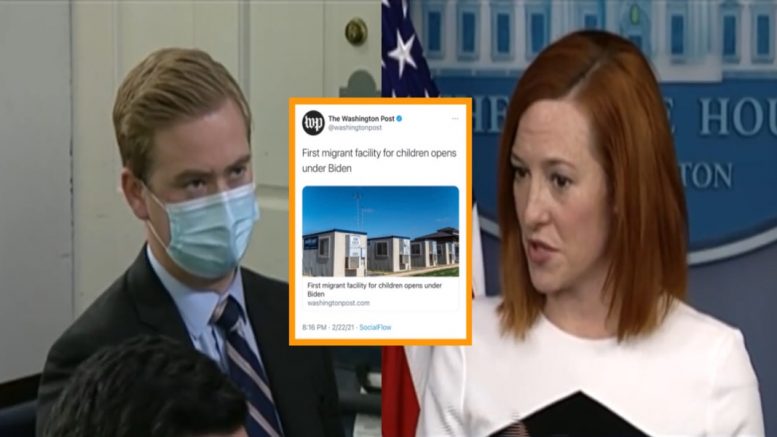 The leftwing Washington Post on Monday night reported on the first newly opened “migrant facility for children” under the alleged president, Joe Biden, which critics previously compared the facilities as “kids in cages” during the Trump administration.

“Dozens of migrant teens boarded vans Monday for the trip down a dusty road to a former man camp for oil field workers here, the first migrant child facility opened under the Biden administration,” the Post reported from Carrizo Springs, Texas. “The emergency facility — a vestige of the Trump administration that was open for only a month in summer 2019 — is being reactivated to hold up to 700 children ages 13 to 17.”

The Post continued, “Government officials say the camp is needed because facilities for migrant children have had to cut capacity by nearly half because of the coronavirus pandemic. At the same time, the number of unaccompanied children crossing the border has been inching up, with January reporting the highest total — more than 5,700 apprehensions — for that month in recent years.”

The headline, which read “First migrant facility for children opens under Biden,” appeared far more charitable than the coverage the Post gave to former President Trump, particularly during the 2018 migrant crisis when the administration enforced its child-separation policy among migrant families, Fox News noted.

“Why is the Biden administration reopening a temporary facility for migrant children in Texas?” Doocy wondered. Continued Below

Psaki responded, telling Doocy that the Biden administration’s policy is “not to expel unaccompanied children who arrive at the border. And the process, how it works, is that Customs and Border control continue to transfer unaccompanied children to the HHS office of Refugee Resettlement. That could take a couple of days.”

Psaki said that due to COVID-19 protocols, the social distancing requirements and capacity limits at Refugee Resettlement Shelters have “been significantly reduced, because, of course, you can’t have a child in every bed.”

Psaki also claimed that it is a “temporary reopening during COVID-19,” and that the administration’s “intention is very much to close it, but we want to ensure that we can follow COVID protocols as unaccompanied minors come into the United States.” Continued Below

But Psaki was pressed further, as the facility that has been reopened is the same facility that was used by the Trump administration in the summer of 2019.

At the time, in an op-ed in the Miami Herald about his Latin America policy published on June 24, 2019, then-candidate Joe Biden said: “Under Trump, there have been horrifying scenes at the border of kids being kept in cages, tear-gassing asylum seekers, ripping children from their mothers’ arms.”

And in July 2019, then-candidate Sen. Kamala Harris said that Trump “has pushed policies that’s been about putting babies in cages at the border in the name of security,” instead calling it “a human rights abuse being committed by the United States government.”

“These are facilities,” Psaki said. “Let me be clear here, one, there is a pandemic going on.” Video Below

“This is not kids being kept in cages,” Psaki alleged. “This is a facility that was opened that is going to follow the same standards as other HHS facilities. It is not a replication. Certainly not.”