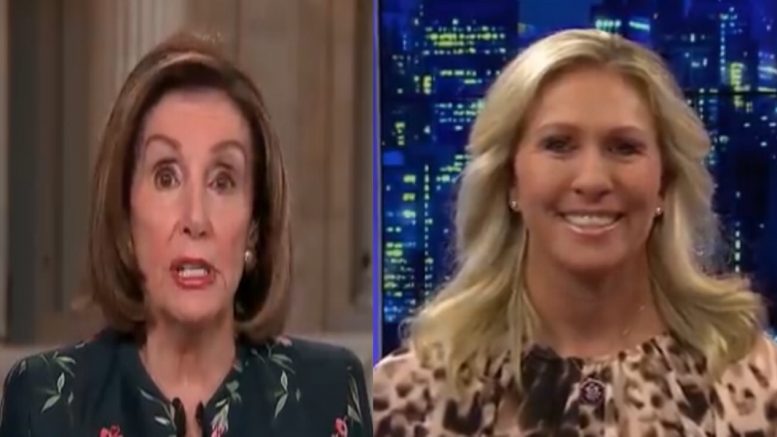 House Speaker Nancy Pelosi (D-CA), during a Sunday interview on ABC’s “This Week”, suggested that former President Donald Trump and climate change is to blame for that the escalating crisis of unaccompanied minors and illegals trying to enter the U.S. Southern border since Inauguration Day.

“What the [Biden] administration has inherited is a broken system at the border, and they are working to correct that in the children’s interest,” Pelosi claimed in part.

Pelosi blames the Trump administration for the border crisis:

“What the [Biden] administration has inherited is a broken system at the border, and they are working to correct that in the children’s interest"pic.twitter.com/LX8mDk43jg

Rep. Marjorie Taylor Greene (R-GA) responded on Twitter in pair of tweets following Pelosi’s claims, asserting that the House Speaker is a liar.

“Biden created the border crisis and no matter how many times [Speaker Pelosi] LIES to the press and tries to blame President Trump, she can’t hide the truth,” wrote Rep. Greene.

“This is why I introduced my Protect America First Act, which is the strongest border security legislation on the books,” she said, pointing to the comprehensive Bill she introduced last week to secure the U.S.- Mexico border. Continued Below

My Protect America First Act will END @JoeBiden’s crisis at the border.

And we only send FEMA for emergencies. https://t.co/wkxopL2Wfk

2. … pour across our southern border every single day and the Biden Admin, Dems, and Fake News are silent.

The intended result of Biden's open borders policy was the intentional flooding of our country with illegal aliens.#ImpeachBiden

Biden’s border.
Children say they have to take turns sleeping on the floor and haven’t showered in a week.
Many of the children were emotional saying how they aren’t allowed to go outside and never see the sun.
1,800 people held in a facility for 250.https://t.co/MMrD7AwGus

(Related: Rep. Marjorie Taylor Greene Recalls The First Exchange She Had With Speaker Pelosi In The Capitol)