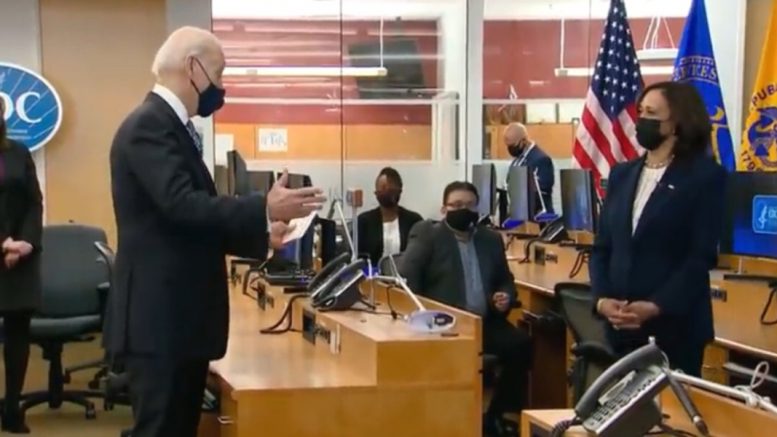 78-year-old Joe Biden repeatedly fell as he climbed up the steps of Air Force One on Friday, while he attempted to board the aircraft at Joint Base Andrews for a flight to Atlanta, Georgia.

When he arrived in Atlanta, he visited the Atlanta headquarters of the U.S. Centers for Disease Control and Prevention to thank public health workers amid the coronavirus pandemic and claimed that “science is back”, though he did not state where or how the science went missing.

Joining Joe Biden at the CDC was Kamala Harris, who echoed his praise for the workers there, but before Harris delivered remarks, Biden chuckled while telling her that she’s “smarter” than him, prompting Harris to respond with a cackling laugh after remarking, “Well, there’s not much to add to that, Mr. President”.

Biden: "I wanted to yield to my Vice President, who’s smarter than I am” pic.twitter.com/6ZShs82YcA

Biden’s visit to the CDC is part of a trip intended to celebrate the partisan $1.9 trillion coronavirus relief package and while there, he falsely touted the measure as a “bipartisan effort” during his remarks to CDC staffers, even though it squeezed through Congress without any Republican support.

“This is a bipartisan effort. It isn’t showing itself in the way senators and congressmen vote, but the publics,” he alleged. “The public is thankful because it’s about science. That’s what they understand.”

“I hope this is the beginning of the end of not paying attention to what’s going to come again,” Biden also told CDC employees, adding that you can build all the walls you want and create the most powerful armies in the world, “but we cannot stop these viruses,” Biden asserted. Video Below