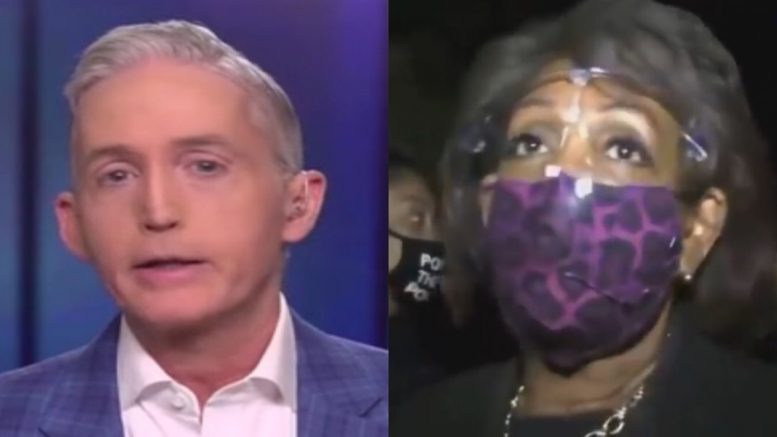 Gowdy’s remark comes after Rep. Waters’ appearance during a Saturday protest in Brooklyn Center, Minnesota, telling reporters that she wanted to see former police officer Derek Chauvin convicted of more than just manslaughter, and urging activists to “stay in the streets”, “fight for justice, and “get more confrontational” if Chauvin is acquitted.

Asked if he could reflect as a former congressman on Rep. Maxine Waters’ role, Trey Gowdy replied, “Yeah you know, Dana, you got Hakeem Jeffries, you’ve got Cedric Richmond. I mean, I can name so many of my colleagues I never agreed with on anything, but they would say, because they’re lawyers, they would say, ‘Let’s respect the system'”.

“You are welcome to disagree with the verdict, but creating more innocent victims does nothing to honor the memory of George Floyd,” he said, on Fox News’ “America’s Newsroom”.

“I mean, Maxine Waters, has unfortunately, a history of– speaking of propensity evidence– she has a history of saying what could only be described as crazy as hell things,” Gowdy expressed.

We leave you with a few examples of previous controversial rhetoric made by Rep. Maxine Waters:

Maxine Waters calls for attacks on Trump administration: "If you see anybody from that Cabinet in a restaurant, in a department store, at a gasoline station, you get out and you create a crowd and you push back on them, and you tell them they’re not welcome anymore, anywhere." pic.twitter.com/jMV7wk48wM