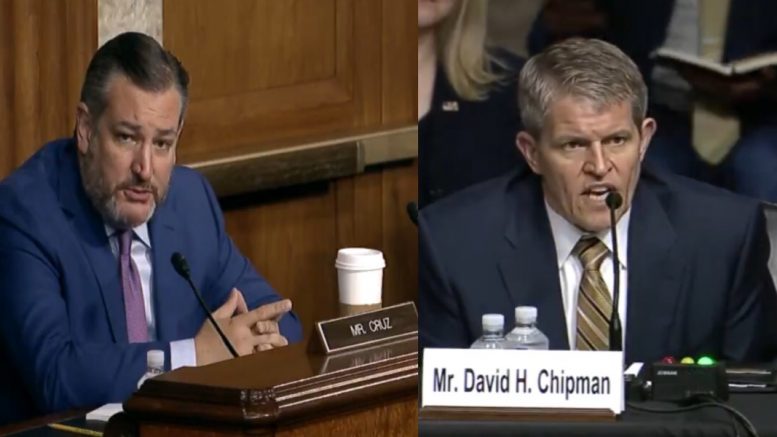 During a Senate Judiciary Committee confirmation hearing Wednesday, Joe Biden’s nominee to lead the the Bureau of Alcohol, Tobacco, Firearms and Explosives (ATF), David Chipman, admitted under oath, that he supports a ban of the AR-15, the most popular rifle in the United States.

“Mr. Chipman, a minute ago Senator Whitehouse asked you if any of your views on guns are out of step with the majority of the American people,” Sen. Ted Cruz (R-TX) said. “The AR-15 is one of, if not the most popular rifle in America.”

“It’s not a machine gun, it’s a rifle,” Senator Cruz pointed out. “Your public position is that you want to ban AR-15s, is that correct?”

“As ATF director, if I’m confirmed, I would simply enforce the laws on the books, and right now there is no such ban on those guns,” Chipman said.

“So, you want to ban the most popular rifle in America,” Senator Cruz wondered. Video Below

Meanwhile, Chipman, when grilled by Senator John Kennedy (R-KY), could not define what an “assault weapon” was:

ATF NOMINEE CHIPMAN: "There's no way I could define an assault weapon in thirty seconds."

SEN. KENNEDY: "If you won't answer my question, how can I vote for you?" pic.twitter.com/efb1FiYTK6

Before working as a gun control activist, Chipman was a special agent with the ATF for 25 years. As Fox News reported, Dudley Brown, the President of the National Association for Gun Rights, slammed Chipman’s nomination, saying “Chipman has embraced every hair-brained gun control scheme proposed, so of course Biden and Harris chose him — he’ll fit right in with their corrupt administration,” Daily Wire reported.