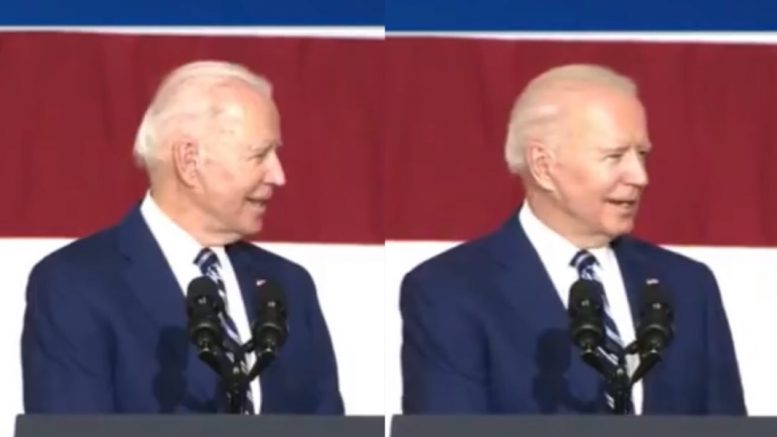 Joe Biden, during a Friday speech at Joint Base Langley-Eustice in Hampton, Virginia, remarked over a little girl’s barrettes and how she looked like a “19 year old.” The speech comes ahead of Memorial Day on Monday.

The little girl is the child of Brittany Bean, an honored guest and wife of a soldier currently deployed in Afghanistan. Bean and her family briefly shared the stage with the Bidens before his speech, The Post Millennial noted.

“I love those barrettes in your hair, man. I tell you what, look at her. She looks like she’s 19 years old sitting there like a little lady with her legs crossed,” said Joe Biden, in part.

Joe Biden looks at a little girl in the audience, the daughter of a veteran, and says "I love those barrettes in your hair. Man I’ll tell you what, look at her she looks like she's 19 years old sitting there like a little lady with her legs crossed." pic.twitter.com/DbH8ihG2Mj

Former counselor to the president, Kellyanne Conway said in a 2019 interview on Fox News: “If anybody just types in ‘Creepy Uncle Joe Videos,’ you come up with a treasure trove– far more evidentiary information and videos than we saw when Brett Kavanaugh’s nomination was trying to be derailed and him, as an individual and family, being destroyed by folks who had no evidence of what allegedly happened 34 years earlier.”

Conway added, “I think Joe Biden has a big problem here because he calls it affectionate hand shakes. His party calls it completely inappropriate.”

Last summer during a Turning Point Action convention in Phoenix, Arizona, Donald Trump Jr. slammed Joe Biden for “sniffing children” and had asked the audience, “Would any of you leave your young child with Joe Biden alone?” Continued Below

Don Jr.’s question to the audience appeared to be over Joe Biden’s inappropriate behavior towards women and children, which can be seen online in several pictures and videos, and which shows the former vice president standing behind women and girls of all ages, massaging their shoulders, rubbing their backs, nuzzling their hair, whispering into their ears, and sometimes offering clearly unwanted kisses.

.@donaldjtrumpjr slams Joe Biden at 'Students for Trump' event: "Would any of you leave your young child with Joe Biden alone?" pic.twitter.com/WRaIIycBeb

(Related: Biden To Coast Guard Academy’s Graduating Class: “You’re A Really Dull Class. Come On, Man. Is The Sun Getting To You?”)