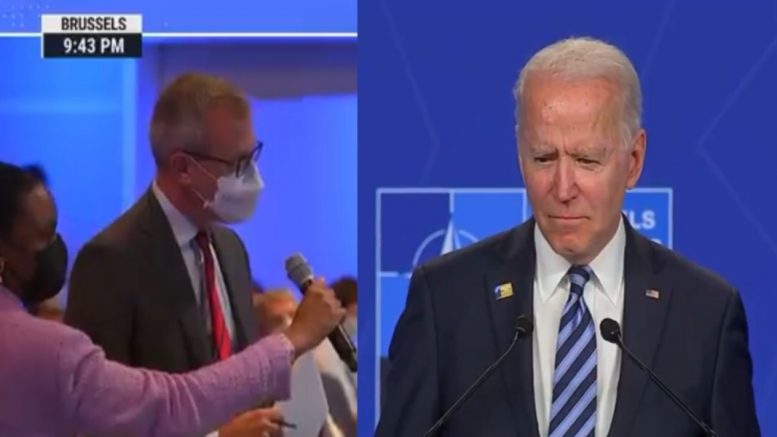 Joe Biden, on Monday, during a press conference in Brussels, Belgium, appeared to struggle when answering a question over previous remarks he made of Vladimir Putin when he described the Russian President as “a killer” earlier in the year, but now, appearing to walk back his comments by calling him “bright”, “tough”, and a “worthy adversary” ahead of their upcoming summit meeting.

Biden said he answered “honestly” last year when he said, “I do” in response to the question about whether he thought the former KGB agent was “a killer.”

CNN’s Jeff Zeleny asked Joe Biden, “In a weekend interview, Vladimir Putin laughed at the suggestion you called him a killer. Is that still your belief, sir, that he is a killer?”

Biden appeared to nervously and oddly laugh, then hesitantly responded: “Well look, I mean, he has made clear that uh, … the answer is, I believe he is in the past essentially acknowledged that he was uh– there are certain things that he would do or did do”.

“But look, when I was asked that question on air, I answered it honestly, but it’s not much of a– I– don’t think it matters a whole lot in terms of this next meeting we’re about to have.

Biden, who kept reporters waiting more than 90 minutes past the scheduled start of his briefing, also said of Putin, “I have met with him. He’s bright, he’s tough”, adding, “And I have found that he is a — as they say when we used to play ball — a worthy adversary,” New York Post reported. Video Below

Biden was just asked if he stands by his statement that Putin is a killer. He nervously laughed and then completely lost his train of thought. I’ve never seen a trainwreck quite like this…

To top it off, he couldn’t remember what the reporter’s second question was. pic.twitter.com/9Ip40rFXUE

Biden calls Putin a “bright,” “tough” and a “worthy adversary” ahead of their upcoming summit meeting:

Biden lavished praise on Putin. If Trump had done this, the media would have a fit. pic.twitter.com/1j5yEJdhf0

Meanwhile, Joe Biden reportedly turned down the idea of a press conference with Russian President Vladimir Putin on Sunday, arguing he did not want it to be a “contest” between the two leaders in front of the media.

The matter came up as Biden spoke about his scheduled Wednesday meeting with Putin in Switzerland at a press conference with reporters.

“I always found — and I don’t mean to suggest that the press should not know — but this is not a contest about who can do better in front of a press conference to try to embarrass each other,” Biden explained, Breitbart reported.