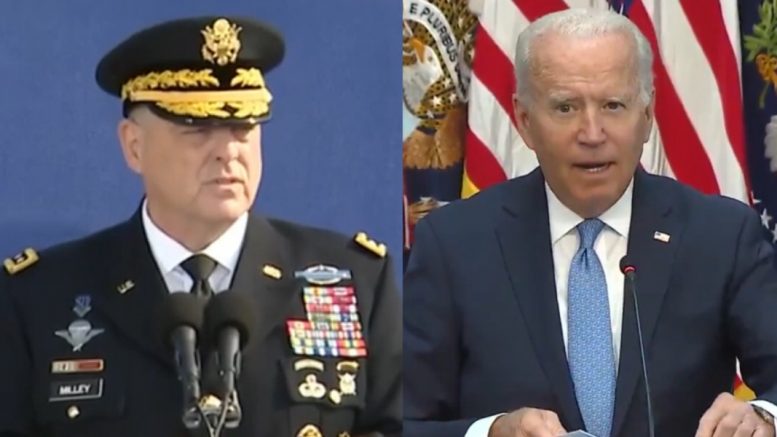 78-year-old Democrat career politician Joe Biden told reporters Wednesday that he has “great confidence” in Chairman of the Joint Chiefs of Staff Gen. Mark Milley, despite reports that the general coordinated with the Chinese and his own staff against 45th President Donald Trump.

Milley reportedly made two phone calls to Chinese officials in fear that Trump would create conflict with the communist nation — according to a book authored by Washington Post associate editor Bob Woodward and national political reporter Robert Costa.

Milley made two secret phone calls, both to his Chinese counterpart, Gen. Li Zuocheng of the People’s Liberation Army. The book alleges that the phone calls took place prior to the 2020 presidential election on Oct. 30, 2020, and two days after the Jan. 6 Capitol [protest], on Jan. 8, 2021, Fox News reported.

In the first call, Milley reportedly told General Li, “I want to assure you that the American government is stable and everything is going to be OK. We are not going to attack or conduct any kinetic operations against you.”

The book, excerpted in the Washington Post, also stated that Milley told Zuocheng that he would warn him in advance should America decide to “attack.”

“Gen. Li, you and I have known each other for now five years. If we’re going to attack, I’m going to call you ahead of time,” Milley added, as reported by the book, “Peril,” which is set to be released next week. “It’s not going to be a surprise.” Continued Below

The authors of the book also claim Milley contacted Zuocheng a second time to reassure him that the U.S. would not make any type of advances or attack China in any form, as Milley promised, “We are 100% steady. Everything’s fine. But democracy can be sloppy sometimes.”

Responding to reporters on Wednesday, Joe Biden said, “I have great confidence in General Milley.”

White House Press Secretary Jen Psaki told reporters on Wednesday, “It’s the obligation of every Chairman of the Joint Chiefs to follow Constitutional orders to prevent unlawful military action. … The president has complete confidence in [Gen. Milley’s] leadership, his patriotism and his fidelity to our Constitution.” Continued Below

BIDEN: "I have great confidence in General Milley" pic.twitter.com/WAj4vIKrtM

PSAKI: "The president has complete confidence in [Gen. Milley's] leadership, his patriotism and his fidelity to our Constitution." pic.twitter.com/3EwfAdSXvs

Joint Staff spokesman Col. Dave Butler released a statement Wednesday acknowledging Milley’s October and January calls to the Chinese, but defended them as part of Milley’s “duties and responsibilities.”

Former acting Secretary of Defense Christopher Miller, who led the Pentagon from the period after the 2020 election through Inauguration Day, said that he “did not and would not ever authorize” Chairman of the Joint Chiefs of Staff Gen. Mark Milley to have “secret” calls with his Chinese counterpart, describing the allegations as a “disgraceful and unprecedented act of insubordination,” and calling on him to resign “immediately.”

In a statement to Fox News, Miller said that the United States Armed Forces, from its inception, has “operated under the inviolable principle of civilian control of the military.”

“The Chairman of the Joint Chiefs of Staff is the highest-ranking military officer whose sole role is providing military-specific advice to the president, and by law is prohibited from exercising executive authority to command forces,” Miller said. “The chain of command runs from the President to the Secretary of Defense, not through the Chairman.”

Fox News has learned there were about 15 people present for the calls. Sources told Fox News that there were multiple notetakers present, and said the calls were both conducted with full knowledge of then-Defense Secretary Mark Esper and then-acting Defense Secretary Chris Miller – something Miller denied. Continued Below

“If the reporting in Woodward’s book is accurate, it represents a disgraceful and unprecedented act of insubordination by the Nation’s top military officer,” Miller said, adding that if the story of Milley’s “histrionic outbursts and unsanctioned, anti-Constitutional involvement in foreign policy prove true, he must resign immediately or be fired by the Secretary of Defense to guarantee the sanctity of the officer corps.”

“Pursuit of partisan politics and individual self-interests are a violation of an officer’s sacred duty and have no place in the United States military,” Miller said, adding that “a lesser ranking officer accused of such behavior would immediately be relieved of duty pending a thorough and independent investigation.”

“As secretary of defense, I did not and would not ever authorize such conduct,” Miller said.

Miller went on to explain that “the reason” he agreed to serve as former President Trump’s Secretary of Defense was “because of his commitment to our service members, veterans and their families and his focus on ending our involvement in overseas operations that lacked strategic coherence.”

“Any accusations that President Trump was intent on starting a war with China are completely unfounded,” Miller said. “President Trump absolutely believed and advocated for a more aggressive approach to China, but he was elected to end our Nation’s wars, not start new ones.  I was proud to play a small role in achieving those goals.”

Miller added: “I look forward to a full, non-partisan investigation of the accusations made by Woodward to guarantee that the genius of our Founders and following generations that established a system and culture of the subservience of our military – the most powerful force in our Nation – to civilian control endures.”