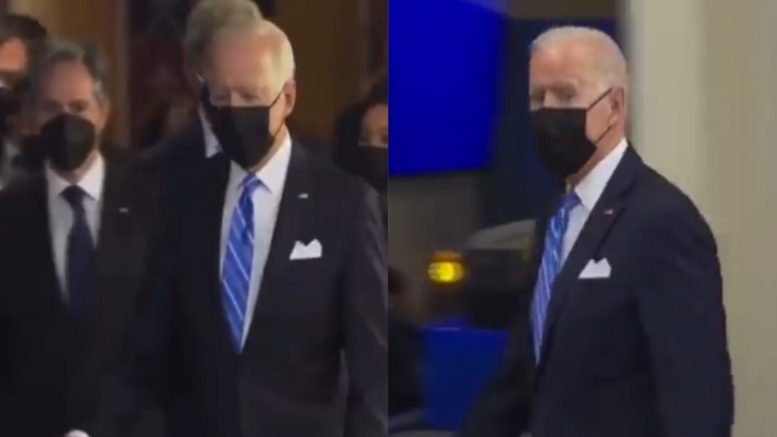 78-year-old Joe Biden seemingly admitted on Tuesday that his administration does not have the U.S.-Mexico border “under control” when pressed by a reporter over the subject.

Biden made the comments during a brief interaction with reporters at the United Nations General Assembly in New York City. The U.S. southern border has faced record-setting border crossings since soon after Biden gained office in January, Daily Caller reported.

“We will get it under control”, Joe Biden claimed without elaborating.

REPORTER: “Mr. President, what's your reaction to the images coming from the southern border?"

BIDEN: "Get it under control"

BIDEN: "We will get it under control" pic.twitter.com/BnB8OdIFA2

President Biden's aides have done everything they can to try to protect him from answering questions about the border crisis. @EmeraldRobinson reports from the United Nations. @HeatherChilders @BobSellersTV https://t.co/VlT7z8v2lm pic.twitter.com/ARSzjOwFUk

Meanwhile, Homeland Security Secretary Alejandro Mayorkas on Monday claimed in part “our borders are not open”, during a press briefing:

Secretary of Homeland Security Alejandro Mayorkas: "Our borders are not open.” pic.twitter.com/pLk6DnYlec

Mayorkas later refused to admit fault during a Senate hearing on Tuesday for the crisis at the southern border.

During @HawleyMO’s questioning, Sec Mayorkas denies⁩ that he or President Biden are responsible for the humanitarian crisis at the border. Today’s “root cause” is “misinformation.” #BidenBorderCrisis pic.twitter.com/Yu0oLaIkuM

In July, Mayorkas promised he had "a plan" to get the #BidenBorderCrisis under control.

"When is your plan going to work?" asks @HawleyMO

Amidst record breaking illegal border crossings and the disaster in Del Rio, Mayorkas says their plan "is, in fact, working."

Senator Ted Cruz (R-TX) said that Mayorkas went to the border for a “photo op” to “attempt to save face for Joe Biden and his administration’s failures”.

Sec. Mayorkas went on yet another photo-op visit today to South Texas in an attempt to save face for Joe Biden and his administration’s failures.

SCHUMER: "I urge President Biden and Secretary Mayorkas to immediately put a stop to these expulsions…We cannot continue these hateful and xenophobic Trump policies that disregard our refugee laws."pic.twitter.com/NjyKo6vq03

(Related: ‘Totally Lost’: Biden Appears Confused Over Where To Enter The White House Upon Returning From Delaware)