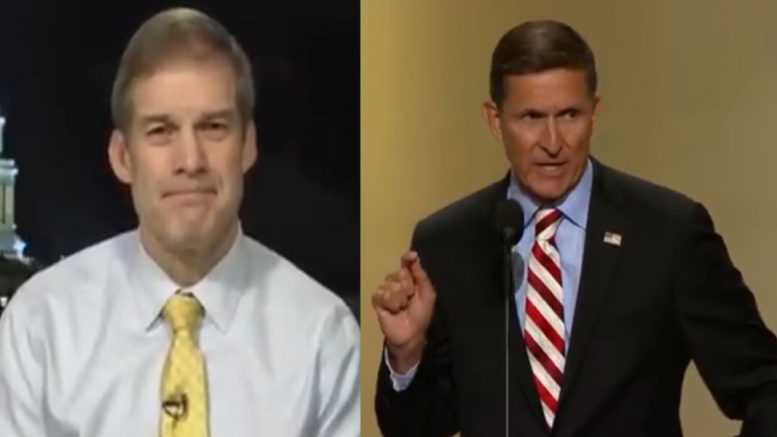 Jordan said the media has been “cheerleading the entire effort” of the prosecution against Flynn since the beginning and citied apparent leaks from the Obama administration, which were published at “interesting times.”

Rep. Jordan detailed the timeline, beginning with a Jan. 4, 2017 message from then-FBI agent Peter Strzok to an unidentified individual: “Hey don’t close RAZOR,” referring to “CROSSFIRE RAZOR” the codename for the FBI’s investigation into Flynn, which was revealed last month in unsealed documents.

“The next day, [FBI Director James] Comey meets with President Obama in the Oval Office and talks about Mike Flynn. [On] January 6th, Comey goes up to New York and briefs President Trump on the [Steele] dossier that he already knows was false, misleading, and paid for by the Clinton campaign, and then that leaks [to the press],” Rep. Jordan said.

On January 12, 2017, Washington Post columnist David Ignatius reported that Flynn had phoned Kislyak “several times on Dec. 29, the day the Obama administration announced the expulsion of 35 Russian officials as well as other measures in retaliation for the hacking.” Ignatius asked whether Flynn violated the “spirit” of the Logan Act — an obscure statute that has never been used successfully in a criminal prosecution, Fox News reported. Continued Below

A transcript unearthed Sunday indicates that The Washington Post’s newsroom was deeply divided over whether it was even worth reporting that incoming National Security Adviser Michael Flynn was speaking to Russian Ambassador Sergey Kislyak in December 2016 — before the Post published details in a column from an opinion writer who “was able to just throw this piece of red meat out there,” per Fox News.

Rep. Jordan, however, suggested the Post’s story led to the Jan. 24 questioning of General Flynn at the White House by Strzok and FBI agent Joe Pientka.

“That Ignatius story helped all that play out,” Rep. Jordan said. “So they are cheerleaders not just in a general sense for the left and for the Democrats, they are cheerleaders at interesting times in the sequence of events. Those are the kinds of things we need to get answers to.” Video Below

Entous: "My sources start whispering to me that there were these mysterious communications" between Flynn and Kislyak.

This caused an internal WaPo discussion about whether to run the Flynn/Kislyak story.

To his credit, Entous didn't find it newsworthy. pic.twitter.com/AComA7uWB7

(Related: Nunes Blasts ‘Enablers’ In The Media, Suggests They Get ‘Looked At For Treason’: “There’s Probably A Hundred Of Them”)