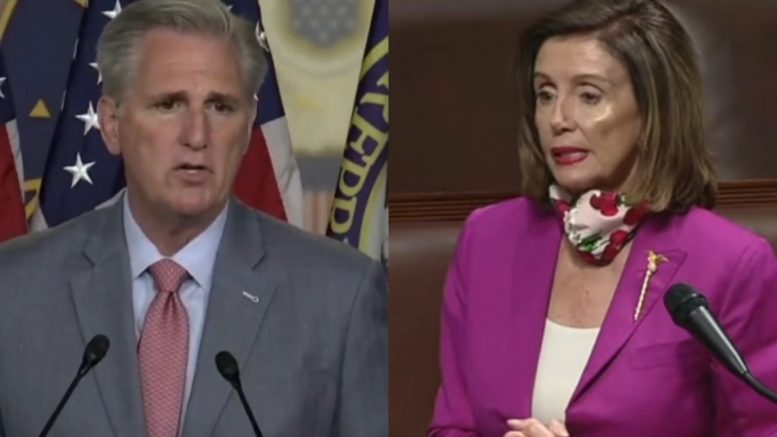 House Minority Leader Kevin McCarthy lashed out at Democrats, calling them “totally out of touch” after a rule change approved by the House on a 217-189 vote will allow for proxy voting and remote committee meetings for up to 45 days as a result of the COVID-19 pandemic.

The rule change, which was backed by Democrats, would end the 230 year-old requirement that lawmakers have to conduct all legislative business in person, according to the Washington Examiner.

As reported by the Washington Examiner:

“The House has required in-person voting since the body first convened in 1789. But Democrats say the coronavirus makes it too dangerous for the House to operate in person and is about to pass a major change that will allow proxy voting and remote committee business that will include virtual votes to advance legislation. One lawmaker will be able to vote on the House floor for up to ten absent lawmakers who provide direct instructions on how they wish to vote.”

In reaction to the rule change, Rep. McCarthy reportedly told the press, “The founders would be ashamed of today.”

Moments later, McCarthy posted a tweet where he blasted House Speaker Nancy Pelosi and Democrats over their move. Video Below

Related Article: Kevin McCarthy On Why Pelosi Doesn’t Want Congress In Session: “It Gives Her A Great Deal Amount Of Power”

“Democrat lawmakers just passed a loophole that allows them to keep getting paid, even if they don’t show up for work,” McCarthy tweeted.

“That’s not how life works for most Americans. Nancy Pelosi’s socialist-democrats are totally out of touch,” he added. Video Below

🚨 BREAKING 🚨 Democrat lawmakers just passed a loophole that allows them to keep getting paid, even if they don't show up for work.

That's not how life works for most Americans. Nancy Pelosi's socialist-democrats are totally out of touch.

You can read more about that by CLICKING HERE.

.@GOPLeader Kevin McCarthy: "Speaker Pelosi is so tone deaf that she dismisses China as a diversion… What we see on the floor today is the real diversion." pic.twitter.com/YkzpDQHmkk

In ending, we leave you with Congressman Dan Crenshaw’s response to the rule change:

This is no joke, even though it sounds like one:

Democrats just passed a bill to do proxy voting.

They don’t want to work. They don’t believe in leading from the front.

If Democrats want to telework, help them find new jobs in November.

Because they shouldn’t be in Congress.