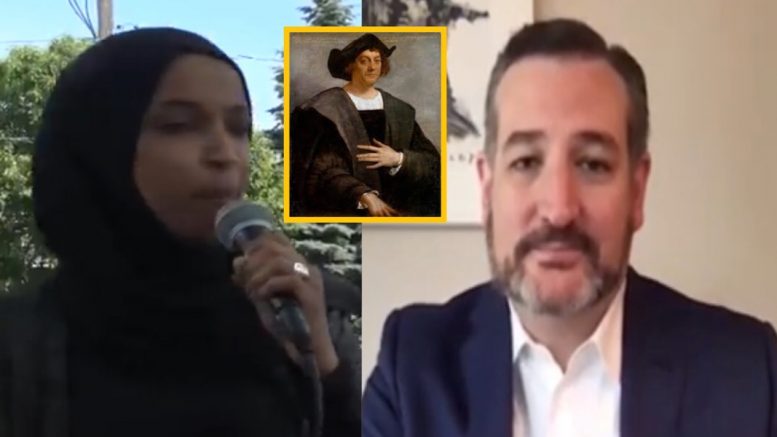 On Wednesday, protesters outside the Minnesota State Capitol in St. Paul yanked down a statue of Christopher Columbus. The protesters threw a rope around the 10-foot bronze statue and pulled it off its stone pedestal.

The protesters, led by Mike Forcia with the Bad River Band of Lake Superior Chippewa, said they consider Columbus a symbol of genocide against Native Americans. The Minnesota State Patrol told the group that they could fill out paperwork to have the statue removed, but they said they had tried many times to remove it through the political process, but without success, MPR News reported.

Upon seeing a video of the statue with Christopher Columbus being toppled to the ground, Senator Ted Cruz (R-TX) took to Twitter Wednesday to repost the video, calling the protestors, “American Taliban”.

“This was organized and led by Indigenous people. Columbus literally started a genocide against them. What a sick thing to say about those taking down monuments to their own oppression,” Omar said.

Reacting to Omar, Cruz responded back to the squad member, asking why did she “oppose the House resolution against antisemitism?” Continued Below

“No, he didn’t commit genocide, ‘literally’ or otherwise. He did discover the New World, which led to colonizers, some of whom inadvertently brought disease,” Senator Cruz informed Rep. Omar.

“Is it your position that it’s inherently immoral to come to America from a foreign land?” Cruz asked. “I’m glad my Dad came from Cuba.”

“And if you want to talk ‘literal genocide,’ we can discuss the Nazis murdering 6 million Jews in the Holocaust. Why again did you oppose the House resolution against antisemitism?” the Texas Senator wondered. Continued Below

In March 2019, House Democrats passed a resolution condemning anti-Semitism and other forms of hatred following days of debate over comments by Rep. Omar pertaining to Israel.

According to Fox News, the resolution originated after Omar – for at least the second time – ignited an uproar for echoing anti-Semitic tropes. In February 2019, she suggested on Twitter that supporters of Israel have been bought. The congresswoman then accused American supporters of Israel of pushing people to have “allegiance to a foreign country.”

Omar also is an avid supporter of the anti-Semitic Boycott, Divestment, and Sanctions (BDS) movement that is designed to destroy the state of Israel. Last summer, Omar was barred from an Israel congressional visit for “supporting” the BDS movement. In 2017, Israel passed a law prohibiting a foreigner entry who “knowingly issues a public call for boycotting Israel.”

Omar, even introduced a pro-BDS resolution last year in Congress and was later condemned by House Speaker Nancy Pelosi (D-CA) at AIPAC, although Pelosi did not use her name directly. “We must also be vigilant against bigoted or dangerous ideologies masquerading as policy, and that includes BDS,” Pelosi said. Continued Below

This was organized and led by Indigenous people.

Columbus literally started a genocide against them.

What a sick thing to say about those taking down monuments to their own oppression. https://t.co/awLxvyXGDZ

2/x And if you want to talk “literal genocide,” we can discuss the Nazis murdering 6 million Jews in the Holocaust.

Why again did you oppose the House resolution against antisemitism?

Related: Judge Jeanine SHREDS Pelosi For Appeasing Omar’s Behavior: ‘The Joke Is On You, Nancy’