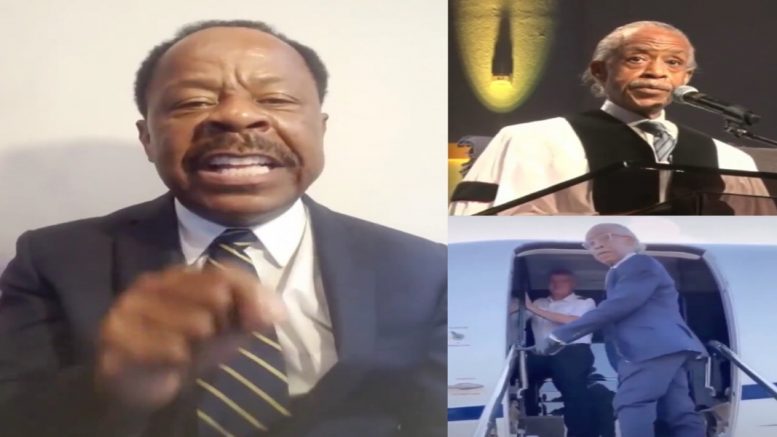 Leo Terrell said in his first video he posted, that he has “received tremendous support for his position to support the police”, appearing to refer to statements he’s recently made on Fox News’ “Sean Hannity”.

“We cannot abandon police officers. They protect us at 2 and 3 am in the morning. 97% of police officers are great,” he expressed. “We have to get rid of the 2 or 3% that are bad.”

Terrell said he’s asking for “your support” to get “this message out”, adding: “Lets make sure we protect the police– that we support the police. We cannot allow these extremest groups to try to defund the police. The police is important to our community. It protects us, and we need them. Help me.”

In his second video message, Terrell asked, “What has Al Sharpton done for America over the last 40 years?” Continued Below

“Has he passed any legislation?” the civil rights attorney asked. “No. Has he won a court case for a victim? No. Has he taught any students in classes? No.”

“All Al Sharpton does is talk, as talk is cheap. If he hasn’t done anything for you as a Democrat, why do you listen to him?” he wondered. “I don’t. Al Sharpton has done nothing. If he’s done something for you, tweet it to me.”

“[Be]cause I will submit to you, Al Sharpton has done nothing for Democrats but just talk and fly on private planes,” he added. Video Below

We leave you with a few other moments on Fox News this week with Leo Terrell over how he feels about protecting the police and the riots that have occurred throughout the country.

Dr. Cornel West and radio host @TheLeoTerrell get into a heated argument on @seanhannity's show. pic.twitter.com/rQrosJ8geB

(Related: Leo Terrell To Dem Lawmakers: “You’re Alienating Me. I’m A Black Voter & You Have Lost Me, If You Don’t Stand Up & Do Something About These Criminals”)