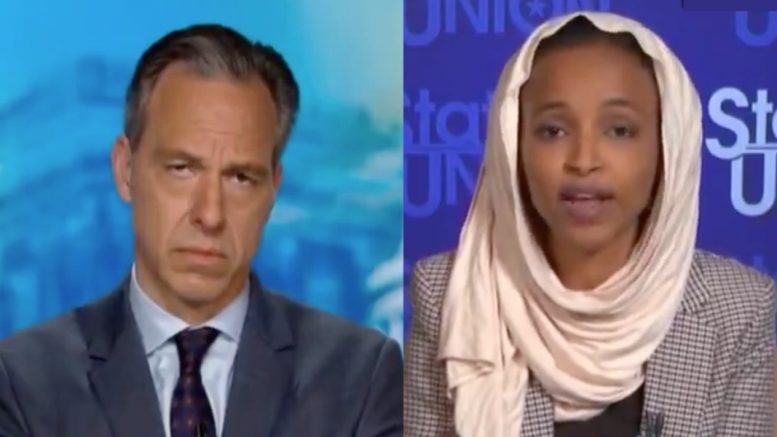 Democratic Rep. Ilhan Omar of Minnesota told CNN’s Jake Tapper on Sunday that the Minneapolis Police Department is “rotten to the root” and “needs” to be “dismantled”.

“Yeah. So Minneapolis unanimously just voted on a resolution that will engage the community on a one year process of what happens as we go through the process of dismantling the police department and starting anew,” Rep. Ilhan Omar said without answering Jake Tapper’s question.

“And so, you can’t really reform a department that is rotten to the root. What you can do is rebuild. And so this is our opportunity, as a city, to come together, have the conversation of what public safety looks like, who enforces the most dangerous crimes that take place in our community,” Omar said.

She went on to say that crimes will be investigated and there will be proper response when “community members are in danger”, adding, “What we are saying is the current infrastructure that exists as policing in our city, should not exist anymore. … And so dismantling it, and then looking at what funding priorities should look like as we re-imagine a new way forward, it’s what needs to happen.” Continued Below

On Wednesday, presumptive Democratic nominee Joe Biden, in a striking rejection of the growing movement demanding better use of public dollars, reminded Americans that there is also plenty of money for police coming from the federal government when he called for an additional $300 million in federal incentives “to reinvigorate community policing in our country”, The Intercept reported.

“I do not support defunding police,” Biden wrote in an op-ed for USA Today. “The better answer is to give police departments the resources they need to implement meaningful reforms, and to condition other federal dollars on completing those reforms. … Every single police department should have the money they need to institute real reforms.”

Tapper told Omar that Majoirty Whip James Clyburn (D-SC) and former Vice President Joe Biden are not in favor of “defunding” the police, and asked for her response. Video Below

The Minnesota Representative said: “It sounds ludicrous to me to have people pour out to the streets asking for the system to be transformed and for us to say in order for that transformation to happen, we’re just gonna give more money to the system without really doing any kind of systematic change. If you had a company was that was not producing, you wouldn’t pour more money it. You would step back and say, ‘Let’s look at what works, what doesn’t work, and how do we move forward?'”

“I think for people who are really questioning and talking about this movement, they’re not paying attention to what the people are asking for. And to me, this is not for members of Congress, this isn’t for the president, this is a municipality issue, … state level issue. And so I happen to represent a city a that is eager and ready to take on this call and deliver. We do more damage when we say to theses people that we don’t believe in their ability to govern their cities and serve their constituents. We do better when we say, ‘What do you need?'” she added.

"You can't really reform a department that is rotten to the root. What you can do is rebuild," Rep. Ilhan Omar explains her calls to defund the police departments. "No one is saying crimes will not be investigated." #CNNSOTU pic.twitter.com/t3q10iJv3C

(Related: Rep. Omar Fundraises Amid Violent Protests In MN: “Organizers In MN Are Putting Their Lives On The line For Justice”)