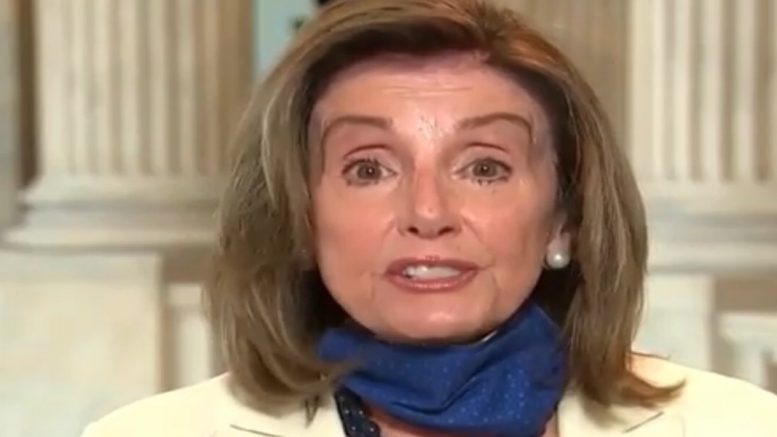 House Speaker Nancy Pelosi (D-CA), on Tuesday, accused Republican senators, during a CBS News interview, of “trying to get away with murder, actually, the murder of George Floyd”, pertaining to police reform.

On Wednesday, Pelosi doubled down and told NBC News’ Peter Alexander that she “absolutely, positively” will not apologize for saying Republicans were “trying to get away with murder … the murder of George Floyd” in the ongoing debate over rewriting U.S. policing laws.

“When you were speaking yesterday, you said Republicans are ‘trying to get away with murder, actually, the murder of George Floyd.’ Senate Republicans are demanding an apology for that statement. Will you apologize?” Alexander asked Pelosi.

“Absolutely, positively not,” Pelosi said. “The fact is: people say– I think you frankly and the press have given far too much credit for a bill that does nothing. Well they say ‘you have your bill, you have yours.’ Yeah, our bill does something, theirs does nothing.”

When asked if Senator Tim Scott (R-SC), who wrote the JUSTICE Act on police reform, is “working in good faith”, Pelosi deflected to say: “I’m talking about Mitch McConnell. … You all in the press ask ‘Can’t we compromise?’ No, we can’t compromise if you say no chokeholds and they say some chokeholds. … There bill is a non starter.”

“I had hoped and kept the door open to the thought that maybe they’ll come up with something that could be recognisable, but they haven’t. And it’s most unfortunate to see that the United States Senate Republicans can ignore hundreds of thousands of people in the streets of America across the country, day and weekend, and now, month– for a long period of time speaking out for justice,” she claimed. Continued Below

Later on Wednesday during a press conference, Senator Chuck Schumer (D-NY) was asked about Speaker Pelosi’s statement over Republicans “getting away with murder”.

“Pelosi has answered that question herself, and whatever she said is fine with me,” Schumer told reporters.

Meanwhile, Senate Democrats on Wednesday, blocked the GOP police reform bill, 55 to 45 on advancing the measure, falling short of the 60 votes needed. Video Below

UNHINGED: Nancy Pelosi accuses Republican senators of "trying to get away with murder, actually, the murder of George Floyd"https://t.co/e8pdwnSUdG pic.twitter.com/tK2dFyy1Px

After Senate Democrats blocked debate on police reform, Chuck Schumer agrees with Nancy Pelosi accusing Republican senators of being complicit in murder: “what she said was fine with me”https://t.co/IxtMUPt5LJ pic.twitter.com/hflkgYuVln