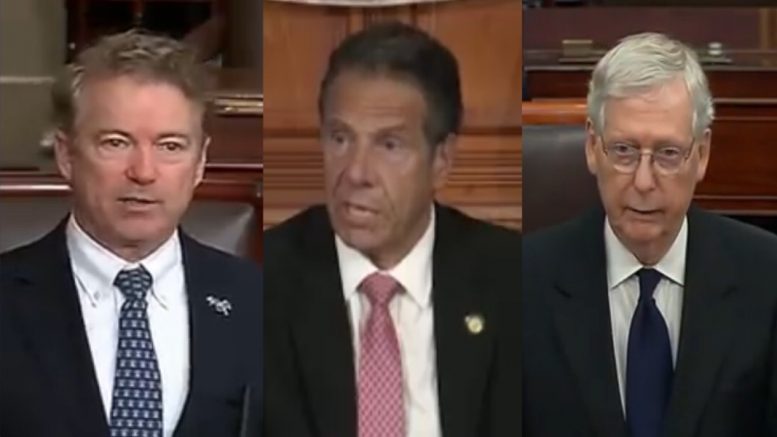 Senate Majority Leader Mitch McConnell released the Republican version of the bill providing a second round of stimulus, calling it the Health, Economic Assistance, Liability Protection, and Schools (HEALS) Act while laying out the vision for the bill, as Congress works to secure aid to those at home and strengthen the economy, Forbes reported.

Some of the proposals in the HEALS Act include:

In response to the HEALS Act not providing additional aide to states, Governor Andrew Cuomo vented his irritation toward Rep. Elise Stefanik (R-NY) and Senators Mitch McConnell and Rand Paul.

“I’ve told Republicans in our state, let them lead by example,” Gov. Cuomo said. “Let the Republican Congress people stand up and say, ‘you know what?  You can’t tell the people of my district to go to heck. You can’t tell the North Country we’re not giving you any local aid.’”

“Where have the Republican congresspeople been?” he asked rhetorically.  “These little tweets, ‘I think there should be state and local aid’.  Stand Up.  Grab the microphone, say full throated, ‘Mitch McConnell, you did the wrong thing by the people of New York in my district.’” Continued Below

“We know that the Senate Republicans don’t want to help the states because they think the states that primarily have the most COVID cases are Democratic States. That’s true,” said Cuomo. “I think that’s hypocritical, because as I’ve said, they don’t have trouble taking money from Democratic states.”

“Mitch McConnell and Rand Paul are federal ‘bag men’ to use a different expression. They take more federal money for their state than they put in,” he said. “They’ve been taking New Yorkers’ money for years, putting it in a bag in Washington and bringing it home to their state. Now New York needs help. It’s total hypocrisy. But it’s also terrible for the economy.” Continued Below

Senator Rand Paul responded to Governor Cuomo on Twitter Monday, writing: “Hey @NYGovCuomo, I’d rather be accused of helping my state get back bags of their money than be remembered for having more body bags per capita than anyplace on earth.”

Hey @NYGovCuomo, I’d rather be accused of helping my state get back bags of their money than be remembered for having more bodybags per capita than anyplace on earth.

“It’s no wonder that Governor Cuomo’s current approval ratings are in the abysmal 20s in the North Country. Governor Cuomo has been so busy blaming everyone else (President Trump, healthcare workers, seniors, De Blasio, nursing home administrators, and the New York Post) for his own fatal failures to manage New York’s COVID crisis, that he and his political cronies must have forgotten how to read before lobbing this false attack.” Continued Below

“I have been clear and consistent throughout the COVID crisis calling for robust support for local governments. In fact, to the Governor’s dismay, on every call I have had with County and local elected officials and school districts, their plea has been to ensure that funds are direct to counties and do not flow through Albany because they know all too well Cuomo’s punitive and damaging record of withholding funds from local governments. Let’s not forget that Governor Cuomo refused to release billions in FMAP money to counties until I publicly called on him to do so.”

“If anyone is withholding money from our counties, it’s Governor Cuomo. In addition to the $9 billion in direct federal aid to New York State and the $165 million I have personally worked to deliver to North Country hospitals, I have a clear and consistent record of advocating for increased funding for our state and local governments throughout the COVID-19 crisis and I will continue to work with my bipartisan colleagues on this critical issue – and I will not be dissuaded by the Governor’s efforts to deflect from his own widely panned and abysmal record,” Rep. Elise Stefanik stated.

THREAD: Setting the record straight: today, Governor Cuomo falsely attacked the North Country and my work in Congress. I have been clear and consistent throughout the COVID-19 crisis calling for robust support for local governments. https://t.co/iFj4Z3riw8