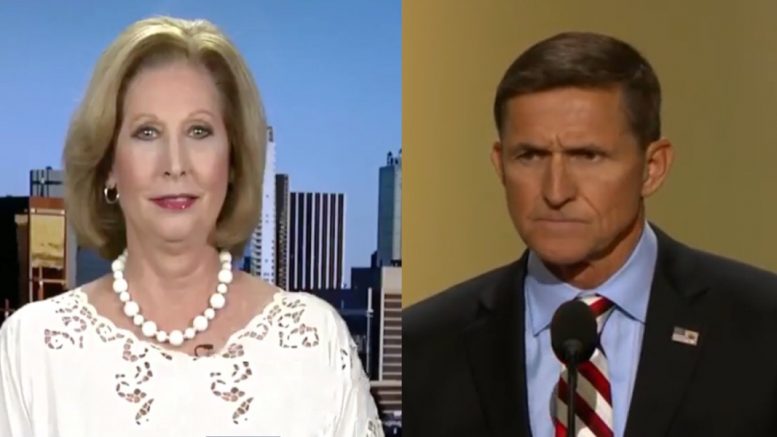 The case ID on the defensive briefing document titled ‘(Redacted) Document Brief to Republican Candidate for U.S. President’ is noted as 97-HQ-2026661 (Redacted) Crossfire Hurricane; Foreign Agents Registration Act – Russia. It was a summary written by FBI Special Agent Joe Pientka, who is still employed by the bureau. Pientka also conducted the briefing with Trump and the officials on the 25th floor of the FBI’s New York Field Office in a classified SCIF, as reported by Sara A. Carter.

Lou Dobbs told Sidney Powell: “Now we know that the first intel briefing for candidate Donald Trump in August 2016, that General Flynn was in the crosshairs of the FBI, the Justice Department, and very clearly, the Obama White House to entrap him, to frame him, and to go after President Trump. Do you agree?”

Powell responded: “Oh, definitely, Lou. They had to take out General Flynn because he would’ve quickly discovered everything that they had been doing; all the illegal surveillance they’d done, all the laws they’d broken. He would’ve tracked down the entire operation. Plus he was gonna audit the intel agencies and downsize everything.”

General Flynn’s lawyer laid out a time, saying: “They opened Crossfire Hurricane on July 31, 2016, then on August 15, [Peter] Strzok and [Lisa] Page are texting about the ‘insurance policy’ they discussed in [Andrew] McCabe’s office. The very next day, they open the file on Flynn, and the day after that, they send Agent Pientka in, to what was supposed to be a trusted presidential briefing, to spy on Flynn and President Trump, who were 2 of only 3 people that were there.”

Dobbs expressed that the intel briefing just now being declassified is “astonishing” and “mind boggling”, adding that “these things keep trickling out.” Continued Below

“The more and more that we learn, is at the slowest pace possible, and it is absolutely maddening that the American people are putting up with this, to me,” Dobbs proclaimed.

Powell noted that the “existence of the that briefing and the fact that it was held and Pientka used it to spy on the president, was actually revealed in the Inspector General’s report in December 2019.”

“But the report of it that agent Pientka did, has only been declassified,” she pointed out. Video Below

Asked if FBI Director Christopher Wray should be indicted for “covering all of this up”, Powell replied: “This is beyond stonewalling. We still don’t have the original 302 in the Flynn case or the first one that was added after that.”

“And we know it was materially altered that includes things he did not say, that they then based the lies on the false statement prosecution on. The FBI made up the entire case against General Flynn. There was nothing there. It’s just appalling,” she said.

(Related: Sen. Graham On The Identity Of The Steele Dossier Sub-Source: “Someone Needs To Go To Jail”