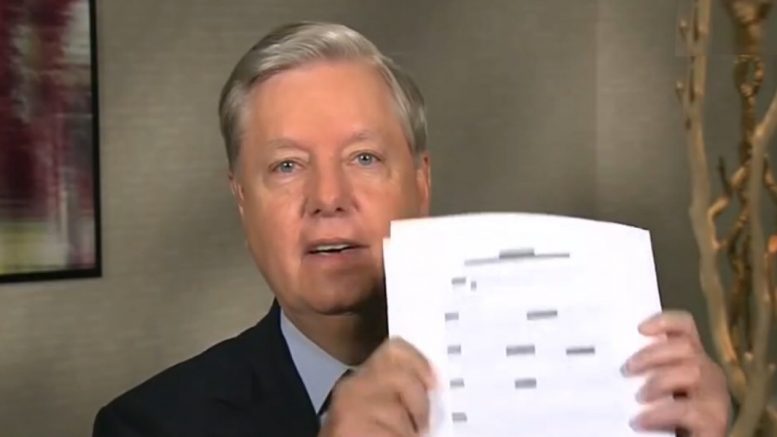 Bartiromo held up the redacted documents and explained that the brief is from the FBI “where they basically tell the Senate in March 2018 … that the sub-source was reliable”.

Senator Graham told Maria Bartiromo that it “took me forever to get them”, adding: “I want to thank Attorney General [William] Barr for helping me retrieve them from the FBI.”

“It was [Inspector General Michael] Horowitz, during his investigation of the warrant application– found information in 2018 where the FBI was called to the Senate [Intelligence] Committee, because people were getting suspicious about the sub-source, the Russian guy, at the Senate Intel Committee level. And the FBI was sent over to brief them, and this is the report they prepared before the briefing,” Graham explained.

He continued: “And they did to the Senate Intel Committee — the FBI did to the FISA court. They misled the hell out of them. They said there’s no evidence from the sub-source to suggest that [Christopher] Steele fabricated anything in the dossier. Actually, the sub-source said it was all ‘bar talk, hearsay, speculation, and conjecture. And the whole sexual activity of the president was made it jest. So they completely misrepresented to the Senate Intel Committee in 2018 what the sub-source told the FBI in 2017.”

Bartiromo laid out points that Senator Graham “finds most troubling” in the Senate document, saying “the first one is the FBI told Congress that the primary sub-source did not cite any significant concerns with the way his reporting was characterized in the dossier to the extent he could identify it.”

“But the sub-source already told the FBI that he had no idea where some of the language attributed to him came from, right?” Bartiromo asked Senator Graham.

“Yeah, he told them. He was interviewed in January 2017, March 2017, and I think April 2017. And after those interviews, he said a lot of the things they’re attributing to me, ‘I don’t know where they came from’. And a lot of the things Steele is saying, didn’t come from the sub-source. It was just conjecture by Steele,” Graham responded. Continued Below

“But the one thing that gets me the most, ‘at a minimum, our discussion with the primary sub-source confirm[s] that the dossier was not fabricated by Steele,'” Graham pointed out, regarding the newly declassified documents.

Graham continued: “Here’s what the sub-source told the FBI a year before: ‘Most of it is word of mouth and hearsay, conversations I had with friends over beers, that some of the information such as the allegations about Trump’s sexual activities were statements made in jest’. But they told the Senate Intel Committee everything’s fine.”

“Somebody needs to go to jail for this!” he declared. “This is a second lie, this is a second crime. They lied to the FISA court. They got rebuked– the FBI did in 2019 by the FISA court– putting in doubt all FISA applications. The FISA court just ripped a new one for the FBI. A year before, they’re lying to the Senate Intel Committee. It’s just amazing the compound of the lies.”

“So I bet you a dollar to doughnuts that the person who briefed the Senate Intel Committee in 2018 was part of Crossfire Hurricane trying to compound lies,” Graham reiterated.

Asked if it was former assistant director of the FBI Counterintelligence Bill Priestep, Senator Graham said, “I don’t know. But I’m gonna write [FBI Director] Wray and I want an explanation. This happened on Christopher Wray’s watch. … I’m gonna find out who did that briefing, and whoever it is, they’re in trouble.”

**Update at 4:45 P.M. Central– Maria Bartiromo tweeted Sunday afternoon: “It looks like the FBI official who briefed the senate intel committee on Feb 14, 2018 was Andrew McCabe”.

It looks like the FBI official who briefed the senate intel committee on Feb 14, 2018 was Andrew McCabe #BreakingNews https://t.co/idZbi9KkjW

(Related: Sen. Graham: People “Will Be Going To Jail” Who Used Dossier For FISA Warrants Months After Sub-Source Interview)