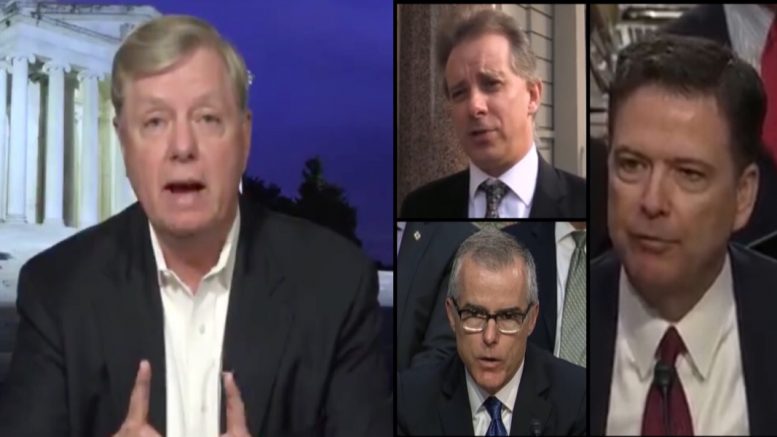 The Republicans on the Senate Judiciary Committee on Friday released newly declassified documents that they say “significantly undercut” the “reliability” of the infamous Steele dossier from the Russia probe, as well as the accuracy and reliability of the factual assertions in the Foreign Intelligence Surveillance Act (FISA) warrants against former Trump campaign aide Carter Page, Fox News reported.

Senator Graham told Judge Jeanine there are two documents that were released on Friday, explaining: “One is a 40 page memo written by an intel analyst and a case agent who interviewed the Russian sub-source, who prepared all the information for the Steele dossier, the guy who put the dossier together. That 40 page memo shreds the reliability of the dossier.”

“In that 40 pages, they talk about it’s all bar talk, it’s all hearsay– none of its firsthand,” he pointed out of the declassified memo.

“Why is it important?” Graham asked. “That document, the dossier, was continued to be used by the FBI months after this interview to get two more warrants against Carter Page. I’ll be shocked if somebody does not go to jail now for defrauding the FISA court. Because those people who submitted the warrant application in April 2017 and June 2017– months after the interview of the sub-source saying it was all garbage. They should be real good candidates to go to jail”.

The South Carolina Senator told Judge Jeanine: “Remember the dossier was crucial to getting a warrant against Carter Page. [Andrew] McCabe said without the dossier there would be no warrant. [Michael] Horowitz, the [DOJ Inspector General] said it was the critical piece of information that allowed a warrant to be issued.” Continued Below

“In January 2017, after 3 days of interviewing the Russian sub-source, who prepared the dossier, he shreds the reliability of it– a 40 page memo was written by the FBI intel analyst. And here’s my question: To the intel analyst and the case agent, who did you tell about this stunning development? Who did you provide the memo to? Did you tell anybody above you, ‘Oh by the way, the dossier is a bunch of garbage?’ And how could it be used in April and June months after this interview?” Senator Graham wondered.

He said the people who used the dossier, to get a FISA warrant against Carter Page with the unreliable dossier, months after the interview, “they will be going to jail”.

“I can’t believe that the case agent and the intel analyst wrote a 40 page memo and never told anybody about it,” the Senate Judiciary Chairman expressed. Continued Below

Judge Jeanine then asked Senator Graham directly: “When are they going to jail?”

“Here’s what I think: [John] Durham is looking at this. The next witness I want to call is the intel analyst who put the memo together. … I want to ask him and the case agent, who interviewed the Russian guy, who did you tell in the FBI? It’s impossible for me to believe McCabe and [James] Comey, who got briefed regularly about Crossfire Hurricane, did not know about this. I have a hard time believing that,” he responded.

Graham also noted of the second document that was released is “comments” by former FBI agent Peter Strzok, from February 15, 2017, saying there was “not any evidence that a member of the Trump campaign was talking or working with the Russians”, adding “contrary to what The New York Times article alleged”, referring to a Times report that alleged Trump associates were in communication with Russian intelligence officers.

“What did we learn from these two documents? The New York Times is corrupt as hell when it came to reporting on Trump,” he added. Video Below

.@LindseyGrahamSC joins me to discuss the newly declassified documents shine a new light on the Dems ridiculous Russia narrative and the infamous Steele dossier. pic.twitter.com/6Iou6tY7Qr

The New York Times is standing by their February 2017 report alleging that Trump associates were in communication with Russian intelligence officers, even after the release of an internal FBI memo that identified numerous inaccuracies in the story.

“We stand by our reporting,” New York Times spokeswoman Eileen Murphy told her own paper for its report on the newly released documents.