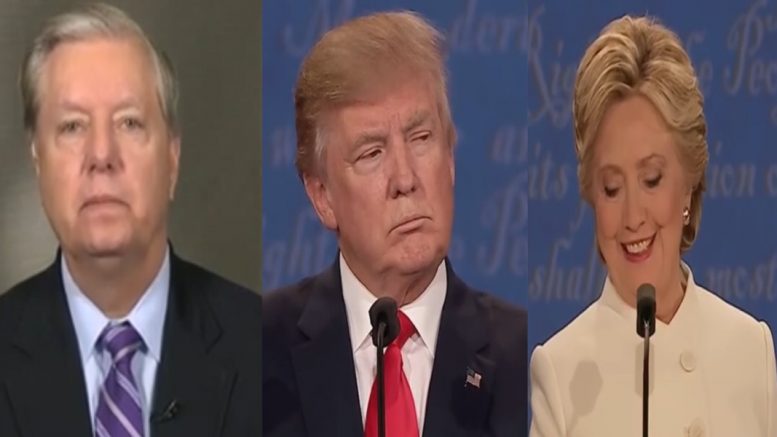 Senate Judiciary Chairman Lindsey Graham (R-SC) announced the release of newly declassified documents on Sunday, which he believes shows an “ultimate double standard” regarding the FBI in its investigations into reports of foreign interference at the campaigns of Hillary Clinton and now-President Trump in the lead-up to the 2016 presidential election.

According to these declassified documents and communications, in 2015, FBI leadership sought to give the Clinton campaign a defensive briefing before an FBI field office could pursue a FISA warrant related to a threat posed to the Clinton campaign by a foreign government. But in 2016, when there was a similar counterintelligence threat to the Trump campaign, FBI leadership failed to give a defensive briefing to the Trump campaign, opting instead to open the Crossfire Hurricane investigation and relentlessly pursue FISA warrants targeting the Trump campaign, as reported by a Senate Judiciary press release.

During a Fox News “Sunday Morning Futures” interview, Senator Graham told host Maria Bartiromo, “This is the mother of all double standards”, referring to the documents which reveal that leaders at the FBI sought to give the Clinton campaign a defensive briefing before it could pursue a FISA warrant related to a threat posed to the campaign by a foreign government.

“Hillary Clinton announces in April 2015, ‘I’m running for president’. It was pretty well known. In March of 2015, the FBI finds out about a plot by a foreign government to lobby her campaign and funnel millions of dollars into the Clinton campaign illegally. They open up an investigation, they want a FISA warrant against a Clinton operative who’s connected to a foreign government,” Senator Graham explained.

“What happens?” Graham asked. “The FBI 7th floor says, ‘We’re not gonna let you get a warrant until you densely brief the Clinton campaign. In October 2015, FBI personal met with the Clinton campaign to tell her about the problem so she could fix it. They never issued the FISA warrant. That was the right way to do business.”

“Forward to 2016. Four counterintelligence investigations [were] opened by the FBI against the Trump campaign, they never tell him about it so he can fix it. They give him a generic briefing about general threats you need to watch out for as a the campaign. Not only did they not mention [General Michael] Flynn, [George] Papadopoulos, [Paul] Manafort, any of the people– they sent an FBI agent into the generic briefing to spy on Flynn and Trump to monitor their behavior when they gave them their general briefing and did a 302 summary of the defensive briefing,” the South Carolina Senator stated. Continued Below

“They used it as a way to spy on Trump, and they informed Clinton about the problems she was facing so she could fix it– the ultimate double standard,” the Senate Judiciary Chairman expressed.

While Graham would not reveal which foreign government wanted to assist Clinton in getting elected, he said that “there was an effort to funnel money into her campaign”, adding: “They picked it up in March. The FBI wanted a FISA warrant to follow to the activity– the 7th floor, the leadership at the FBI said, ‘No. You can’t get a warrant until you densely brief her’. They did that in October. They gave her a chance to fix the problem. I assume they did.”

“They never did that to Trump. They never told Trump, ‘Oh by the way, you gotta Carter Page problem, you gotta Papadopoulos problem. As a matter of fact, not only did they not tell Trump, they used a generic briefing to spy on Trump. And the 7th floor [FBI] comes into play again in 2017. The FBI felid office wanted to close the Flynn investigation out. They wanted to drop General Flynn from Crossfire Hurricane because there was no there-there,” he said. Continued Below

“They never did anything to protect Trump”, he stated. “They tried to set him up for failure. … They used this a political tool to get a man they didn’t like and didn’t want him to be president. This a very big deal and I hope [John] Durham is looking at it.”

The materials released include FBI agents’ recollections of a defensive briefing of Clinton attorneys and a summary of what would be covered in the Clinton defensive briefing. In addition, there are emails between an FBI field office and FBI headquarters, including correspondence with former FBI Director James Comey. [Documents and communications]. Video Below

These are the newest declassified documents showing the differences between treatment of the Clinton and Trump campaigns.https://t.co/0h4yQuK7Dq

The FBI’s double standard when it came to the Clinton and Trump campaigns.#CrossfireHurricane pic.twitter.com/1jcT7LFwnM