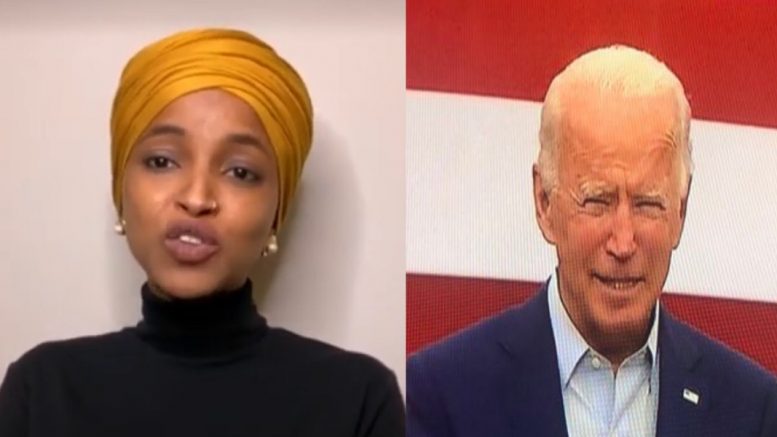 Rep. Ilhan Omar (D-MN), a member of the “the squad”, spoke with MSNBC’s host Ali Veshi on Sunday, saying Democratic presidential nominee Joe Biden “is going to be responsive to the policy positions we are advocating for,” and also renewed calls for “dismantling” police.

Asked how the Biden campaign is doing on “talking to progressives”, regarding “policy changes on economic and social levels that are more inclusive as Americans as a whole”, Rep. Omar said she “represents one of the most processive districts in Congress”, adding that “representation really is one that is responsive to you know, the needs of the people”.

“Most of the progressives that I represent feel like is that this is our time to make sure we get rid of Trump and elect someone who is going to be responsive to the policy positions we are advocating for,” Omar said.

“Biden’s economic package is one that gets a step closer to addressing the economic and social neglects that have went unaddressed for so long,” she claimed.

Asked about Minneapolis’ policing in the city and what needs to be done, the Minnesota congresswoman said, “The George Floyd murder in the hands of Minneapolis police has really opened our eyes to really understanding the credibility and crisis in Minneapolis’ police department has had for so long.”

“The majority of people in Minneapolis don’t trust the Minneapolis police,” she alleged. “And when you have an institution that has lost the trust of the people that it’s suppose to serve, then you have to make a big decision on what you do with that institution. And for so many of us, it is going through a process of dismantling that institution and coming together as a community to reimagine what public safety looks like for us.” Continued Below

(Related: Ilhan Omar Demands Answers As ICE Prepares To Deport ‘Dozens’ From Her District Back To Somalia)

“That means, you know, getting resources to address things like mental health crises that shouldn’t be addressed by the police. Things like stopping the criminalization of poverty. It means, you know, having resources go into public safety mechanisms that currently are not part of the infrastructure that exists’ with the Minneapolis police department,” she continued.

Rep. Omar went on to say, “That’s a long process, and it’s one that Minneapolis is committed to, our leaders are committed to it, our constitutes are committed to it. And I believe, you know, we are a resilient city and we will come through this with a plan that really provides safety for each and every single person in our city, regardless of what zip code they’re living in and what color of their– the skin they’re in.” Video Below

In June, the Minneapolis City Council unanimously approved a proposal to change the city charter to allow the Police Department to be dismantled with a 12-0 vote.

However, the Minneapolis City Council’s proposal to dismantle the city’s police department will not be on the November ballot after the Minneapolis Charter Commission voted in August to take more time to review the plan.

In a 10-5 vote, the Charter Commission elected to take an additional 90 days to review the Council’s proposal. The delay means this proposal now misses the statutory deadline of August 21 and will not appear on the November ballot for voters to decide, reported CNN.