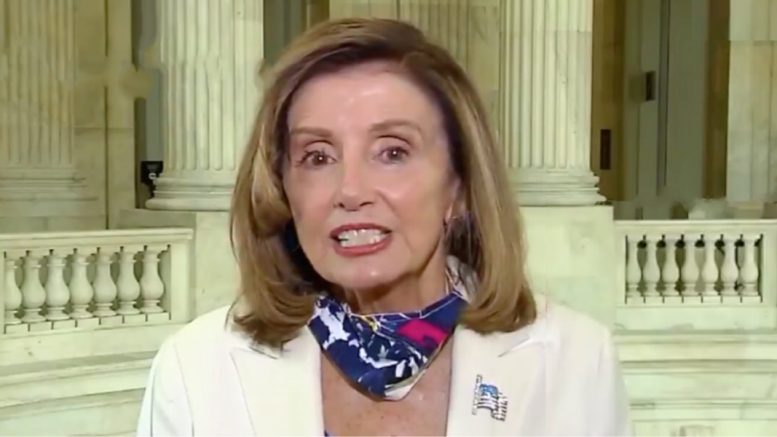 During an interview, Bloomberg TV’s David Westin asked Pelosi if she believes Biden should follow through and face President Trump in the two remaining presidential debates, which she responded, “I think one and done.”

“Just between us, I myself did not think that Joe Biden should dignify debate with the president who has no commitment to fact, evidence, data, demeans the office he holds,” Pelosi claimed. “And you saw on that stage authenticity on both sides. President authentically a bully, Joe Biden authentically decent.”

“So it was a sad occasion for our country, broke my heart. I haven’t slept 5 hours combined both nights since then, because what it meant for our country to have president not committed to honoring the peaceful transition of government or condemning White supremacists, abolishing affordable care act, ignoring the climate crisis,” she alleged.

Pelosi continued: “Well, you know, people say they should’ve had a button to turn one microphone off while the other person was speaking. Whatever it is, I think one and done, one and done. When people run for president, that’s president of the United States– Joe Biden will do– he’s courageous.”

Last month during a interview on CBS’s “This Morning,” Pelosi tried to justify why she thought Biden should pull out debating with President Donald Trump.

The California Democrat claimed that the Commander in Chief “has no fidelity to fact or truth”, “isn’t committed to our Constitution,” and that “he and his henchmen are a danger to our democracy”, asking, “why bother” holding a debate with President Trump.

In August, she had also told reporters that Biden should cancel his three scheduled debates with the president. “I don’t think there should be any debates,” Pelosi said. “I wouldn’t legitimize a conversation with him, nor a debate in terms of the presidency of the United States.”

The next debate between President Donald Trump and Joe Biden will be October 15 at the Adrienne Arsht Center for the Performing Arts in Miami, Florida and will be moderated by Susan Page, USA Today’s Washington bureau chief, as reported by WTKR.

The third and final presidential debate of this cycle will be held just days before Election Day on October 22. The event is set to take place at Belmont University in Nashville Tennessee and will be moderated by Kristen Welker, White House Correspondent for NBC News and weekend co-anchor of the Today Show, per WTKR.

(Related: Pelosi Claims Trump Is ‘Trying To Have The Constitution Of The United States Swallow Clorox’)