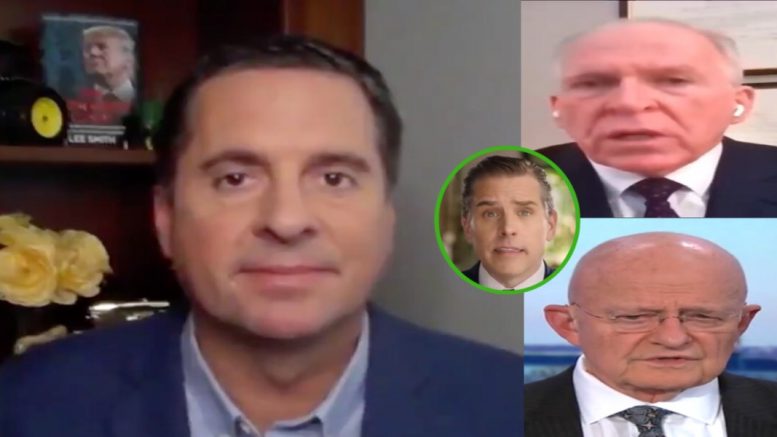 More than 50 former senior intelligence officials have signed on to a letter outlining their belief that the recent disclosure of emails allegedly belonging to Joe Biden’s son “has all the classic earmarks of a Russian information operation”, POLITICO reported. Nick Shapiro, a former top aide under CIA director John Brennan, provided POLITICO with the letter.

The letter, signed on Monday, centers around a batch of documents released by the New York Post last week that purport to tie the Democratic nominee to his son Hunter’s business dealings. Under the banner headline “Biden Secret E-mails,” the Post reported it was given a copy of Hunter Biden’s laptop hard drive by President Donald Trump’s personal lawyer Rudy Giuliani, who said he got it from a Mac shop owner in Delaware who also alerted the FBI, per POLITICO.

Director of National Intelligence John Ratcliffe said on Monday that the information on Biden’s laptop “is not part of some Russian disinformation campaign,” during an interview with Maria Bartiromo on Fox Business.

“Let me be clear, the intelligence community doesn’t believe that because there’s no intelligence that supports that,” Ratcliffe said, shooting down Democrats’ theories. “And we haven’t shared any information with Chairman Schiff or any other member of Congress that Hunter Biden’s laptop is part of some Russian disinformation campaign. It’s simply not true. … Hunter Biden’s laptop is not part of some Russian disinformation campaign, and I think it’s clear that the American people know that.”

Ranking Member of the House Intel Committee, Rep. Devin Nunes (R-CA) responded Tuesday to the letter signed by 50 former senior intelligence officials, telling host Lou Dobbs on Fox Business, “I think it’s pretty easy to understand … these are same cast of characters, who if Donald Trump wins re-election, are likely facing the wrath of the Department of Justice, if not by [John] Durham, the U.S. attorney out of Connecticut– likely through a special counsel that will have to get to the bottom of everything we’ve incurred since 2016.”

“Those 50 people that signed that– the ones that you mentioned especially are knee deep in it,” Rep. Nunes said, referring to James Clapper and John Brennan. “They’ve run their mouth over the course of last four years, claiming, ‘Russia, Russia everywhere’ when the truth is what we now know– they knew this was Russia disinformation likely that was in the Hillary Clinton was using. We knew that Hillary Clinton was actually worried about her emails coming forward. That’s why she did this. … The idea that this is Russian disinformation is an absolute joke.” Continued Below

“Can you imagine some Russian agents sneaking around with three of Hunter Biden’s laptops and being able to sign Hunter Biden’s name? And low and behold, there’s all sorts of pictures on his laptop and emails that have now been confirmed. It’s absolutely preposterous,” Rep. Nunes expressed.

A photo showing an alleged Hunter Biden signature on paperwork for the computer repair shop was posted on Twitter and obtained by Fox News’ Mike Emanuel. 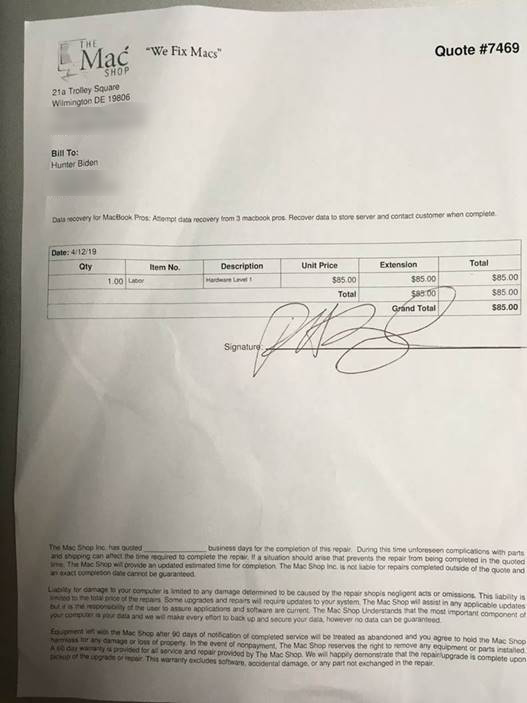 Lou Dobbs said during the interview with Rep. Nunes, “The fact that Brennan and Clapper and those who signed on [to the letter], I mean that is humorous in the extreme, and it means they are committed to the bitter end to fight this nation’s interests, to fight the truth, and the American people. It’s stunning. And meanwhile, Joe Biden himself, has not in any way, denied the reporting of the New York Post or any of the other outlines. That reporting has not been denied.”

“Yet, you have Brennan and Clapper trying to cover for the Biden family,” Dobbs added.

Earlier in the month, DNI Ratcliffe declassified documents that revealed former CIA Director John Brennan briefed former President Obama on Hillary Clinton’s purported “plan” to tie then-candidate Donald Trump to Russia as “a means of distracting the public from her use of a private email server” ahead of the 2016 presidential election.

“We’re getting additional insight into Russian activities from [REDACTED],” Brennan’s notes read. “CITE [summarizing] alleged approved by Hillary Clinton a proposal from one of her foreign policy advisers to vilify Donald Trump by stirring up a scandal claiming interference by the Russian security service,” Brennan’s notes read. Continued Below

Rep. Nunes reiterated that “they need this desperately to go away because they’re the ones that are likely sitting holding the bag”, clarifying, “Clintons will be gone, Obama’s will be gone, if Trump wins reelection. So they’re desperate for Biden to win so this whole investigation can be completely shut down”.

“I think this is about the big picture of the swamp striking back to try to get rid of Donald Trump who they don’t like,” he added.

On Monday, Congressman Andy Biggs (R-AZ) and ten Members of Congress sent a letter to U.S. Attorney General William Barr, requesting that the Department of Justice immediately appoint an independent, unbiased special counsel to investigate recent issues that have been raised about former Vice President Joe Biden’s involvement with his son’s business dealings.

On Tuesday, the Commander in Chief said during an interview Tuesday on “Fox & Friends”, “We’ve got to get the attorney general to act.”

(Related: Giuliani On All Evidence That’s Been Uncovered On The Bidens: “There’s Enough For A Conviction”)