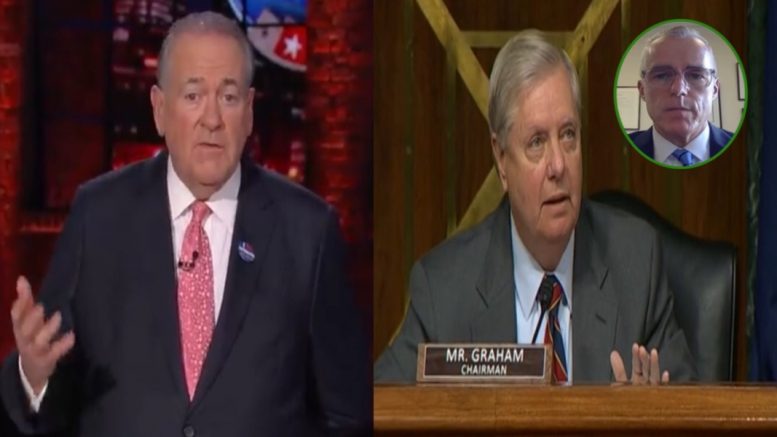 Senate Judiciary Chairman Lindsey Graham (R-SC) pressed McCabe over the CIA’s “investigative lead”, which they had sent to the FBI, to inform the bureau of Hillary Clinton’s “approval of a plan concerning U.S. presidential candidate Donald Trump and Russian hackers, hampering U.S. elections as a means to distracting the public from her use of a private email server”.

In October, Director of National Intelligence, John Ratcliffe, declassified documents that revealed former CIA Director John Brennan briefed former President Obama on Hillary Clinton’s purported “plan” to tie then-candidate Donald Trump to Russia as “a means of distracting the public from her use of a private email server” ahead of the 2016 presidential election.

“Wait a minute, time out,” Senator Graham interjected. “You get a memo, an investigative lead is what the CIA calls it– alleging that Hillary Clinton just signed off on a plan to tie Trump to Russia for political purposes. How many people looked at that? How many agents were assigned to see if it were true or not? Did you know about it?”

McCabe claimed he “was not aware of that memorandum”, which prompted Senator Graham to again say, “Wait a minute, time out. You get a CIA memo, an investigative lead memo, suggesting that the Democratic candidate for president, Hillary Clinton, is trying to divert attention from her email server problem, by casting aspersions against the Trump campaign being connected to Russia, and you didn’t know about it? How is that possible? Continued Below

McCabe said he “read the memo recently, understanding it went to Director Comey and was also to the attention of Peter Strzok”.

“That memorandum that you’re referring to, as I read it, is a response to a FBI request, oral request, for an update of the sort of information that the Crossfire Hurricane taskforce was reviewing about Russian activity in the campaign,” McCabe said.

Senator Graham told the former FBI deputy director, “I’m hear to tell you, that’s not what happened, and we’ve got the documents– sent to the FBI information suggesting that Hillary Clinton approved of a plan to link Donald Trump to Russia for political purposes and it went to Peter Strzok.”

“How do you explain to the American people that when the FBI received a memo from the CIA alleging that Hillary Clinton had signed off on a plan concerning U.S. presidential [candidate] Donald Trump and Russia hackers hammering U.S. elections as a means of distracting the public from her use of a private server– that you did nothing? Should Peter Strzok have told you about this?” Senator Graham pressed McCabe. Continued Below

“I can’t explain to you, Senator, what Peter Strzok or Director Comey thought about that memo at that time,” McCabe responded. “… It is not clear to me there’s an allegation of criminal conduct in that memorandum. That is based on my current reading of it. I did not see it at the time.”

Graham then wondered, “So if you’re gonna have a counterintelligence investigation opened up against the Trump campaign based on a conversation by the Australian ambassador to the United Kingdom based on a bar conversation, you’re telling me that’s legit and you put all the resources for two and a half years– run that down. What you’re telling this committee, when our own CIA suggests that Hillary Clinton signed off on a plan to link Trump to Russia for political purposes, you didn’t do a damn thing? Is that your testimony?”

“I cannot, sir, explain to you what Peter Strzok or anyone else thought at that time,” McCabe claimed.

Upon watching the exchange between Senator Graham and the former FBI deputy director, former Arkansas Governor Mike Huckabee suggested on Twitter Tuesday that McCabe needs to “take a break” to “change his underwear” as graham grilled him over the CIA memo. Continued Below

“Watching @LindseyGrahamSC grill Andy McCabe at Senate hearing. They will need to take a break so McCabe can change his underwear. About time to see ppl who abused their power have to answer for it. TY @LindseyGrahamSC!” Gov. Huckabee tweeted.

Watching @LindseyGrahamSC grill Andy McCabe at Senate hearing. They will need to take a break so McCabe can change his underwear. About time to see ppl who abused their power have to answer for it. TY @LindseyGrahamSC !

Republicans, don’t let Andrew McCabe continue to get away with totally criminal activity. What he did should never be allowed to happen to our Country again. FIGHT FOR JUSTICE!

(Related: Graham To Comey: “Knowing Then What You Know Now… Would You Still Sign The Warrant Application Against Carter Page In Oct, Jan & April?”)