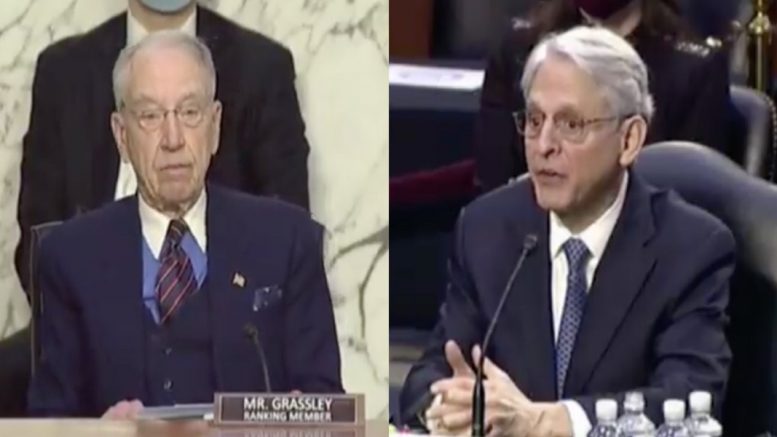 During a Monday Senate Judiciary Committee confirmation hearing, nominee for attorney general, Merrick Garland, appeared to dodge questions regarding John Durham as special counsel, who is investigating into the origins of the Trump-Russia probe.

Before resigning in the Trump administration, former Attorney General William Barr appointed Durham as special counsel to continue his investigation into the U.S. government’s intelligence-gathering activities related to the Trump campaign.

In October 2019, John Durham’s investigation shifted to a criminal probe. The investigation has produced one criminal charge so far, against former FBI lawyer Kevin Clinesmith, who was accused of altering an email related to the surveillance of a former Trump campaign aide.

During the hearing on Monday, Ranking Member Senator Chuck Grassley (R-IA) asked Merrick Garland directly, “With respect to special counsel Durham’s investigation, I expect that he will be allowed to complete his investigation. If confirmed will you commit to providing Special Counsel Durham with the staff, resources, funds, and time he needs to thoroughly complete the investigation?”

Garland dodged questions about the release of a report from Durham’s investigation, saying that he will “have to talk with Mr. Durham and understand that nature of what he’s been doing, the nature of the report.”

“I don’t have any information about the investigation as I sit here today. And another one of the very first things I’m gonna have to do is speak with Mr. Durham and figure out how his investigation is going. I understand that he has been permitted to remain in his position, and sitting here today, I have no reason to think that was not the correct decision,” Garland said. Continued Below

“I really do have to have an opportunity to talk with him. I have not had that opportunity,” Garland told Senator Grassley when pressed over his position if he would remove Durham only for cause.

Asked if he was confirmed, would he publicly commit to releasing Special Counsels’ Durham’s report as the Mueller report was made public, Garland replied, “I am a great believer in transparency”, adding that he will have to speak to the prosecutor before making a final determination on his status.  Video Below

Senator Grassley said that Garland was “not quite as explicit” on the Durham question as he had hoped.

“At this point, I’m not going to take exception to the answers you gave me about Durham, because I think you’re an honorable person. They’re not quite as explicit as I hoped they would be, like we got from Barr for the Mueller investigation. But I think you’ve come close to satisfying me, but maybe not entirely,” he expressed.

If Merrick Garland won’t commit to letting John Durham finish the ‘Russia probe’ investigation, he should not be Attorney General.