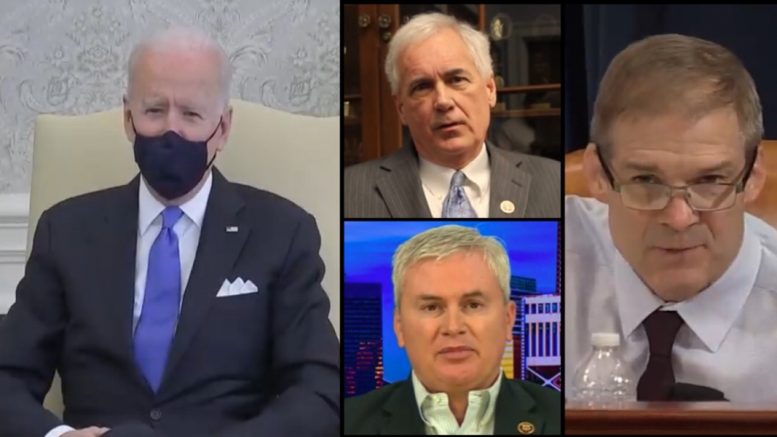 Republicans are pressuring Democrats to hold oversight hearings about the Biden administration’s handling of the thousands of unaccompanied migrant children and families arriving at the border each week, the first attempt to force Democrats to deal with the situation to the same extent that they were concerned during the Trump administration, Washington Examiner reported.

House Judiciary Committee Ranking Member Jim Jordan (R-OH) and House Judiciary Subcommittee on Immigration Ranking Member Tom McClintock (R-CA) sent a letter to the Democratic chairwoman of the subcommittee, Rep. Zoe Lofgren (D-CA), to schedule a time to question the top homeland security and health officials about the situation on the southern border and how the Biden administration is overseeing the response.

“We write to request that you schedule a hearing of the Subcommittee on Immigration and Citizenship to examine the Biden Administration’s response to the sharp increase of unaccompanied alien children (UAC) arriving at the southern U.S. border. Proper oversight requires that Subcommittee Members have the opportunity to hear directly from Department of Homeland Security (DHS) and Department of Health and Human Services (HHS) officials, and to question them about the escalating crisis and whether they have plans to stop the surge,” the lawmakers wrote.

“Last Congress, the Committee and Subcommittee held several hearings ‘to hold the Administration accountable for its failure to effectively manage the humanitarian crisis at the border and its continued mistreatment of children,’” Reps. Jordan and McClintock said. “Your silence on this issue in the last five weeks unfortunately suggests that you do not plan to hold the Biden Administration to the same standard to which you held the Trump Administration.”

At the same time, House Oversight and Reform Committee Ranking Member James Comer (R-KY) sent a letter to Chairwoman Carolyn Maloney (D-NY) requesting that she immediately hold a hearing on how the Biden administration will stop the flow of families and children to the United States as well as how it will house and release people who are taken into federal custody.

“Members of your own party have raised concerns about the Biden Administration perpetuating a policy of housing children in containers—something Democrats renounced during the prior administration,” Rep. Comer stated in part. “This Committee must schedule a hearing to conduct oversight of the welfare of migrant children being held in these container facilities.” Continued Below

🚨BREAKING🚨@JoeBiden's open border policies have led to thousands of unaccompanied children being held in nearly overflowing container facilities. We’ve sent a letter to @RepMaloney demanding a hearing on how the Admin plans to mitigate this crisis of their own making. pic.twitter.com/LrZP83k915

Meanwhile, Axios reported on Thursday that an average of 321 children were being transferred from Border Patrol custody to the Department of Health and Human Services each day during the final week of February, a rate that is six times higher than the first week of January.

NEW: Leaked internal documents from the Department of Health and Human Services show how quickly the number of child migrants crossing the border is overwhelming the administration's stretched resources. w @StefWKight https://t.co/c3Df3E9P9Z