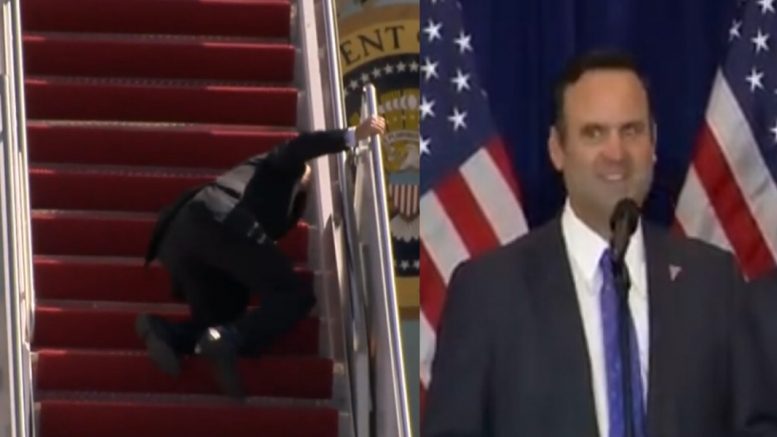 The White House spokeswoman reportedly told reporters aboard the presidential aircraft that she also was nearly toppled by the wind. “It’s pretty windy outside. It’s very windy. I almost fell coming up the steps myself,” Jean-Pierre claimed, adding that Biden “is doing 100 percent.”

White House communications director Kate Bedingfield also tweeted, “I know folks have seen that President Biden slipped on his way up the stairs to AF1, but I’m happy to report that he is just fine and did not even require any attention from the medical team who travels with him. Nothing more than a misstep on the stairs.”

Scavino tweeted a video clip of the 45th President walking up stairs to Air Force One:

He followed up with another video:

Meanwhile, Donald Trump Jr. posted screenshots of the wind speed at Joint Base Andrews in Maryland, which showed a light breeze of 14mph:

Biden Spox: Yea, the wind!!! That’s it… the wind. The president is in tip top shape.

The wind did not prevent the plane from taking off for a trip to Atlanta, Georgia, New York Post noted.