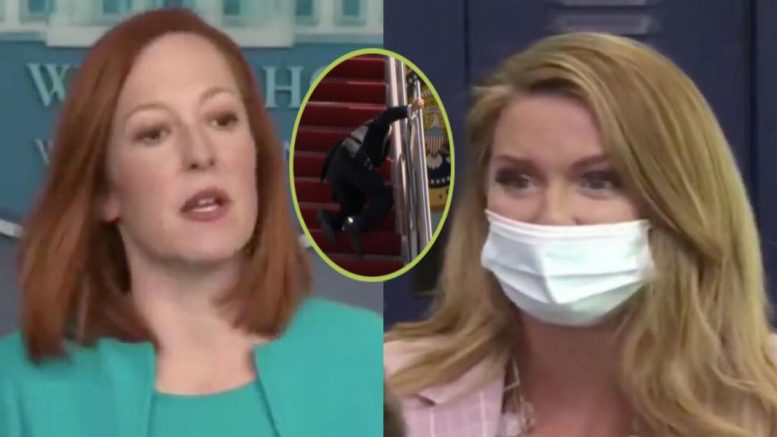 78-year-old Joe Biden repeatedly fell as he climbed up the steps to Air Force One last Friday, while attempting to board the aircraft at Joint Base Andrews for a flight to Atlanta, Georgia.

Newsmax White House correspondent Emerald Robinson asked White House press secretary Jen Psaki about Joe Biden’s fall and wondered if he was doing okay and whether he had seen a doctor over the situation.

Jen Psaki claimed that Joe Biden is “doing 100% fine” after falling repeatedly when he climbed up the steps to Air Force One. “I don’t if you’ve been up those steps; they’re a little tricky sometimes,” she asserted.

“I’m not aware of that being required. There’s of course a doctor who travels with the president, any President of the United States, but I’m not aware of it needing actual extensive medical attention,” Psaki said.

Robinson also pressed Psaki over reports regarding the Biden administration awarding an $86 million contract for hotel rooms near the border to hold around 1,200 migrant family members who cross the U.S.-Mexico border. Continued Below

“Also, you are opening new facilities. One of the options being reported over the weekend is spending $86 million on hotel rooms for some migrants and feeding them. How can you square that with the National Guard troops who were sleeping in parking garages?” Robinson asked.

“Some of them got sick from contaminated food. That’s a disparity a lot of people are pointing out– that the National Guard was treated one way and then illegal immigrants are gonna be put in hotel rooms,” the Newsmax White House correspondent explained.

Psaki did not deny the reports over illegal aliens staying in hotel rooms, but remarked, “At the time when we became aware of the conditions the National Guard troops in a parking garage as you noted, the president called the head of the National Guard that day and offered his assistance, offered to play any role that he could play– boosting morale, asking for more aid, making sure they had– were treated in the way that they deserved for the incredible role they play.” Video Below

By that math, he’s spending around $395 a night per room.

How many of you have stayed in a $395/night hotel room?

Hotel rooms are being handed out to illegal aliens, at the expense of American tax dollars yet our military is forced to sleep in parking garages and open halls. pic.twitter.com/xd9IRzvGld

Joe Biden let the National Guard sleep in garages but buys $86,000,000 worth of hotel rooms for illegal aliens.

(Related: Watch: Biden Darts Off After Telling Reporters He Knows ‘What’s Going On In Those Facilities’ At The Border)