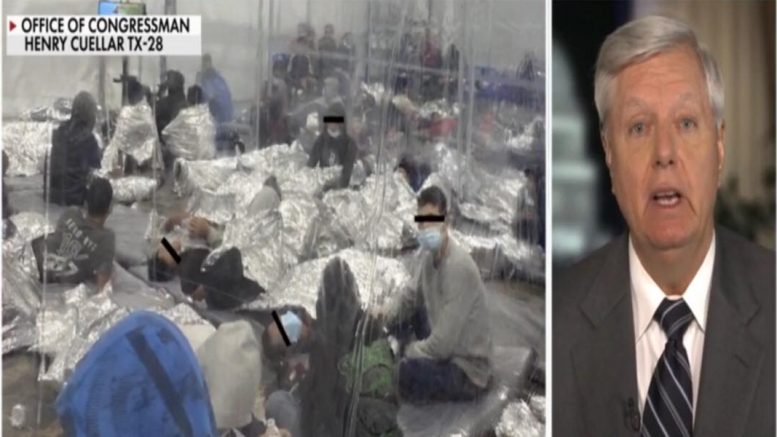 Senator Lindsey Graham (R-SC) responded to an alleged email, which was revealed by investigative journalist Sara Carter and obtained from a Border Patrol whistleblower that exposes new details of the migrant facility in Donna, Tx.

The letter described conditions inside the facility as “extremely unsafe and unhealthy for the detainees, agents, and civilian workforce,” Sara Carter reported.

“The overcrowding is inhumane, especially for the children,” the letter continued. “Pod 3A is designed to hold 80 people and on this day we have 694 unaccompanied children with two agents maintaining custody. That is 867% of the stated capacity of this detention space. The agents cannot possibly provide for the care, health, and safety of aliens in our custody, nor can we reasonably do so for ourselves.”

Border Patrol Chief Rodney Scott responded to the email, saying he hears the whistleblower “loud and clear.” The U.S. Customers and Border Protection confirmed the validity of the emails with a statement, saying the facility is no place for a child and vowing to “protect the nation and enforce laws humanely,” as reported by Sara Carter.

Senator Lindsey Graham told Sean Hannity on Tuesday of the email, “Congratulations to Sara Carter and your team. If this is proven to be true, and I have no doubt it is, we have a humanitarian [crisis]. … Pod 3A, according to your reporting is suppose to hold 80 people. There were 694 children in Pod 3A being managed by 2 Border Patrol agents. God bless the Border Patrol, God bless the custom agents that are dealing with the Biden administration’s shit show at the border”.

“I am going down [to the border] with 18 senators Friday, and if I’m denied the ability to look into any place I want to go, we’re going to shut the Senate down,” he warned. “Where are all the liberal hypocrites? Where is AOC? Where is Elizabeth Warren? Where is Vice President Harris, who basically protested outside of a facility– in Homestead, Florida during the Trump years– holding migrant children?” Continued Below

Graham was referring to Sen. Elizabeth Warren (D-MA) and Rep. Alexandria Ocasio-Cortez (D-NY), who in 2018, were photographed crying outside a Tornillo, Texas, migrant children detention center.

The South Carolina Senator said, “President Biden, Vice President Harris, will all do respect, get off your ass and go to the border and look and see what you have caused by policies that will not work. Quit denying the obvious. This is not a crisis, it’s beyond a crisis. It’s a national security disaster in the making. It’s an inhumane situation caused by bad policies. It will never change, President Biden until you tell everybody to go home and stop releasing people in the United States. If you’re not willing to do those two things, we’ll have a million or two people at our border.”

“This is big news. Can you imagine if you found these emails on President Trump’s watch? Can you imagine the news tomorrow if you had 694 children in a pod meant for 80 people, managed by two Border Patrol agents? Can you imagine the problems with COVID that we’re experiencing at the border? 14,000 unaccompanied a month coming. Why? Because the first thing they did is to decide to exempt unaccompanied children from Title 42 deportation. Word spread all over Central America. If a child makes it into America, they’re gonna stay in America; they’re not gonna be sent back,” he explained. Video Below

“They have created this problem because they have changed policies that were working. Where are the liberals going to the border and looking at the kids like they did at Trump?” Graham wondered.

“All I can say is, I’m going down with 18 senators, if they deny me the ability to go where I want to go and see what I want to see, we’re going to shut the Senate down. They’re not gonna get away with this,” he warned.