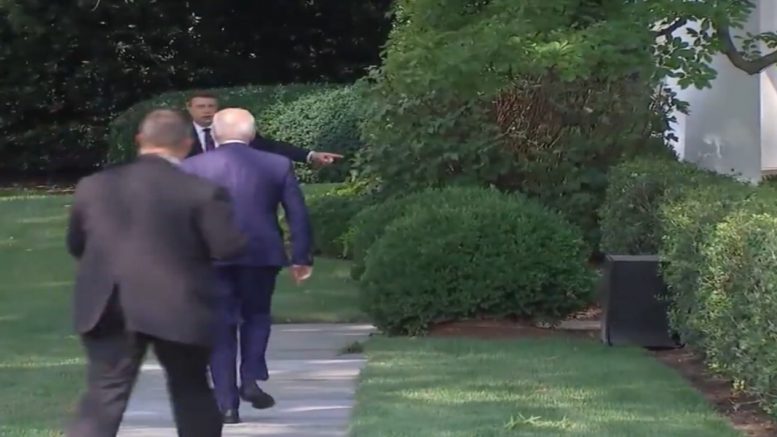 78-year-old career politician Joe Biden returned to the White House on Tuesday after reportedly arriving back from a trip to Wilmington, Delaware.

In video surfaced on social media, Biden is seen outside of the White House walking next to what appeared as secret service agents– who seemingly directed the 78-year-old which way to enter the White House.

As seen in the surfaced video posted by The Hill on Twitter, a secret service member signaled to Biden the direction to follow, appearing to point to the right of the pathway to enter the White House.

Biden, however, appeared to not follow the direction in which the secret service member pointed to, and instead, kept walking straight, seemingly lost and confused.

The career politician walked around bushes, past the walkway, rather than following the alleged directions from the secret service agent outside of the entrance to the White House.

Biden ultimately found his way after walking around the bushes. Video Below

Biden appears confused on his walk back to the White House:

Following Biden’s alleged mishap, some users on Twitter reacted. We leave you with a few highly engaged responses:

One user noted though:

They have to point to show him where to walk just like they have to write down what he has to say.

What a complete embarrassment

Frail doesn’t even begin to describe that lumbering spectre of death.

He walked passed where the guy pointed to and kept walking on the grass following the handler. Such a joke

They literally pointed the walkway out to him and he still went the wrong way. https://t.co/Chc3KVzDFa

Why does the secret service have to point out the path to him?

(Related: Biden Appears To Lose His Train Of Thought During His First Formal Press Conference)