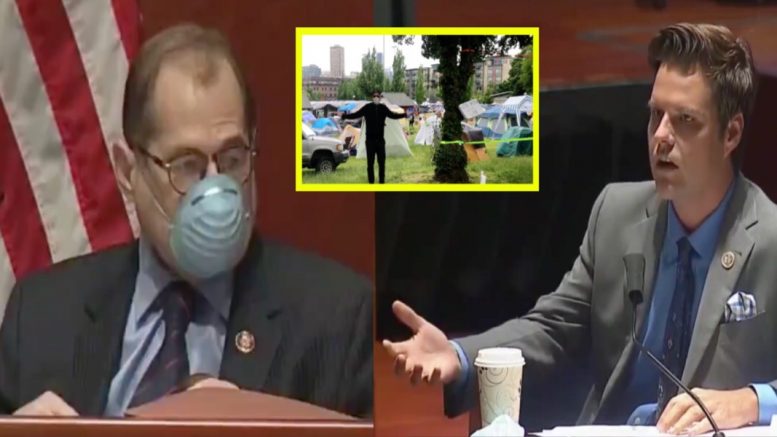 “There seems to be a good amount of dispute what life is like in the CHAZ,” Gaetz said. “The gentlelady says it’s like a peaceful, poetry community garden, and yet, we see these reports of rapes and delayed response time.”

Rep. Gaetz went on to say: “We see videos of people assaulting each other and demanding race-based payments.”

“And so, I would just ask the chairman, would you be willing to host a CODEL, a congressional delegation in the CHAZ, so we might all be able to go there and show the country what’s happening and observe it in real time? And then, if the CHAZ is something that the majority would like to have spread across the country, perhaps you could make that case in vivid color,” he said.

Gaetz continued: “But I’ll yield to the chairman to answer whether or not he’d be willing to lead the CODEL to the CHAZ.”

Judiciary chairman Jerrold Nadler did not respond to Rep. Gaetz’s request and instead said, “The time of the gentleman has expired.” Continued Below

It would not be the first time congress took a trip together. For example, last summer, a group of over 20 House Democratic congressional members and a dozen Senate Democrats visited the US-Mexico border to observe detention centers and border facilities.

Many claimed there was not a crisis at the border, before President Trump ultimately called a national emergency to secure the southern border and obtain funds to build the wall. Video Below

We leave you with a tour inside of CHAZ from chief creative officer at Turning Point USA, Benny Johnson: