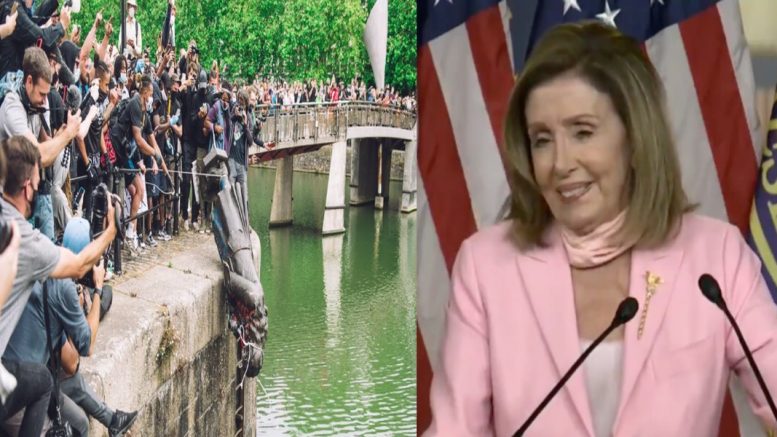 During a press conference Thursday, House Speaker Nancy Pelosi (D-CA) responded to a question about the toppling of a statue of Christopher Columbus on July 4 in Baltimore, saying, “People will do what they do”.

The Columbus statue was taken off its podium and thrown into the Inner Harbor by protesters on Saturday. The statue had stood near Baltimore’s “Little Italy” neighborhood and was put in place in 1984, The Hill reported.

“If the community doesn’t want the statue there, the statue shouldn’t be there. … But I don’t care that much about the statues. … People will do what they do,” Pelosi told a reporter over a Christopher Columbus that was thrown in the Harbor in Baltimore.

Nancy Pelosi on mobs tearing down statues: “people will do what they do”https://t.co/a2evgYu3vZ pic.twitter.com/5gQDWD6Vdb

During a Washington Post live stream interview last month, however, Pelosi suggested having a “review” in regards to the taking down of statues, but said she was “all for it”.

“I would say rather than tearing down and defacing, why don’t we just have a review– have a review, in terms of let’s take it down safely, so that we’re not hurting anybody when the statue comes down, costing more money to get rid of it, or get rid of the defacing of something that might not– shouldn’t have been,” she said.

“But I think– I’m all for it! Let’s review this. Why are we glorifying the sins of the past? That doesn’t mean– [be]cause Thomas Jefferson or George Washington, or others were slave owners that should undermine what they did for our country,” Pelosi added.

Baltimore protesters pulled down a statue of Christopher Columbus and threw it into the city’s Inner Harbor on the 4th of July:

Nancy Pelosi’s full remarks on the statues during her Thursday press conference:

Meanwhile during the Thursday press conference: