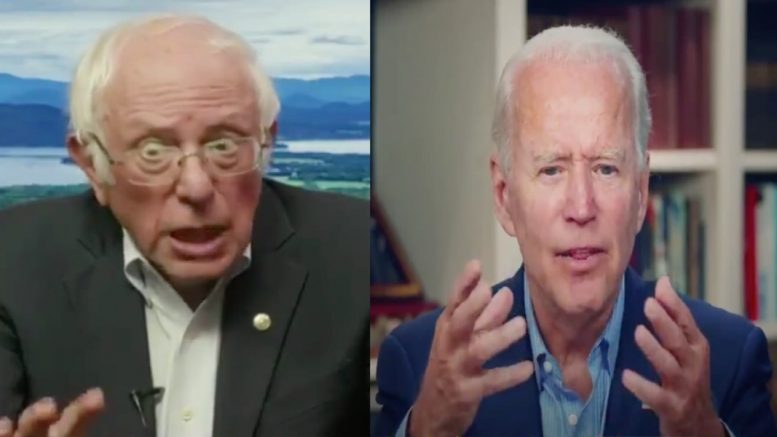 “We’re going to beat Donald Trump,” Joe Biden tweeted. “And when we do, we won’t just rebuild this nation — we’ll transform it.”

We're going to beat Donald Trump. And when we do, we won't just rebuild this nation — we'll transform it.

Bernie Sanders’ remarks came as a task force set up by the two former rivals released a wide-ranging set of recommendations for the party’s convention platform.

“I was glad to work with the vice president, in forming 6 different task forces, which had some the most knowledgeable people in the country coming together to deal with education and climate change, and health care and the economy, and the criminal justice, and immigration reform. And these folks– these people represented the progressive movement at a different perspective on things than did Biden’s people,” Sen. Sanders said on MSNBC.

“But there was serious discussion and I think a real honest effort to come up with a compromise. And I think the compromise they came up with, if implemented, will make Biden the most progressive president since FDR,” Sanders said. “It did not have, needless to say, everything that I wanted, everything that Biden wanted.” Video Below

Socialist Sen. Bernie Sanders brags that the policies Joe Biden has adopted “will make Biden the most progressive president since FDR”https://t.co/Ej6m1Jqv7F pic.twitter.com/R2YwLo20kX

“The fact Joe Biden has embraced Bernie Sanders’ radical agenda verbatim is proof that while Bernie may not be the one leading the Democrat Party, Biden is more than happy to be his champion in its lurch to the left,” Guest tweeted, before taking a shot at Biden’s previous plagiarism scandals: “Bottom Line: Joe Biden has years of experience copying from others, now his task force is straight up copying from Bernie’s 2020 campaign proposals.”

The fact Joe Biden has embraced Bernie Sanders’ radical agenda verbatim is proof that while Bernie may not be the one leading the Democrat Party, Biden is more than happy to be his champion in its lurch to the left. pic.twitter.com/3gqFPEBblN

Democrat Reps. Rashida Tlaib (MI) and Ayanna Pressley (MA) introduced a bill this week, the BREATH Act, that would defund prisons, eliminate life sentences, and allow undocumented immigrants to vote and provide them with free “lifetime education.” Biden said on Monday that some funding for police departments “absolutely” should be redirected.

Last June during a Democratic debate, Joe Biden raised his hand in support for healthcare for illegal aliens.

In March, Biden announced that he was adopting two campaign plans from Senators Bernie Sanders and Elizabeth Warren (D-MA). “First: Bernie has put forward a plan that would make public colleges and universities free for families whose income is below $125,000. It’s a good idea, and after consideration, I am proud to add it to my platform,” he tweeted.

Biden continued: “Second: Few people in the country understand how bankruptcy hurts working families more than Elizabeth Warren. Today, I am fully endorsing and adopting her bankruptcy plan, which she called ‘Fixing Our Bankruptcy System to Give People a Second Chance’”.

Biden also said in March, that if elected president “in the first 100 days of my administration, no one, no one will be deported at all”.