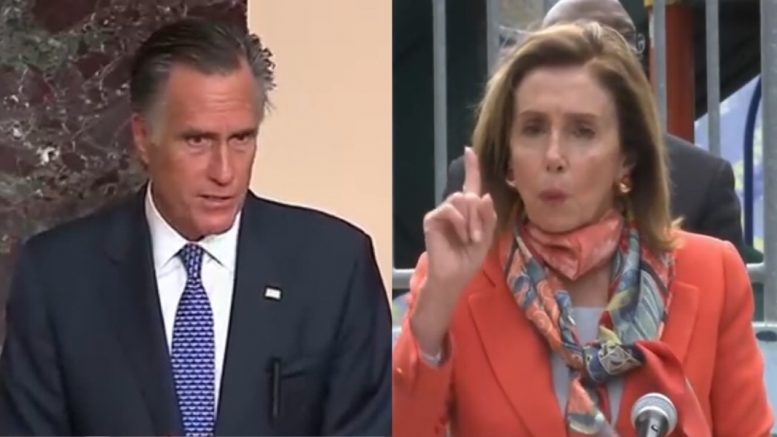 Senator Mitt Romney (R-UT) trolled House Speaker Nancy Pelosi (D-CA) on Monday on Twitter after by tweeting a picture of his wife giving him a haircut at home, saying it was a “better salon than Pelosi’s” after the California Democrat went against local coronavirus guidelines in San Francisco.

Romney tweeted a photo of himself getting his hair cut from his wife Ann Romney outside of his house.

“Getting cleaned up for resumption of the Senate. Better salon than Pelosi’s!” Senator Romney declared.

Getting cleaned up for resumption of the Senate. Better salon than Pelosi’s! pic.twitter.com/wosz3MyKdw

Romney’s tweet comes after Pelosi made headlines last week after getting caught last week for a wash and blow-out at San Francisco ESalonSF, despite local ordinances keeping salons closed amid the coronavirus pandemic.

Salons in San Francisco had been closed since March and were notified they could reopen on Sept. 1 for outdoor hairstyling services only.

Pelosi later claimed she was “set up”, insisting that the hair salon “owes” her an “apology”. Continued Below

“I take responsibility for trusting the word of the neighborhood salon that I have been to over the years, many times,” Pelosi told reporters last week. “When they said we’re able to accommodate one person at a time, and that we can set up that time, I trusted that.”

She added: “As it turns out, it was a set up. So I take responsibility for falling for a set up. And that’s all I’m gonna say on that.. … The salon owes me an apology for setting [me] up.”

(Related:  Amid Coronavirus Pandemic, Pelosi Shows Up In D.C. Outside Of The Capitol To Join Protestors)