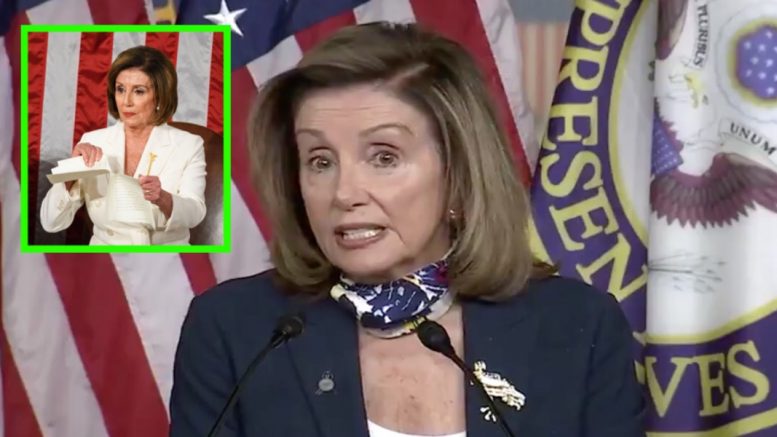 Thursday during her weekly press conference, House Speaker Nancy Pelosi (D-CA) accused the Commander in Chief of causing “many deaths”, as a result of the global coronavirus pandemic.

“The fact that the president knew– he’d been saying for a long time the whole thing was a hoax. His delay, denial, and distortion of what was happening has caused many deaths,” Pelosi claimed, referring to remarks made at a Trump rally in South Carolina on February 28. At one point during the rally, President Trump said, “And this is their new hoax.” But he did so in the context of assailing Democrats for trying to politicize what the Democrats saw as his administration’s shortcomings in combating the crisis, Fact Check pointed out.

Pelosi went on to suggest that if the House Democrats’ HEROES Act was passed, a $3 trillion coronavirus stimulus package, it would have saved lives. She, however, did not mention that the bill, which includes massive assistance to states and local governments suffering from the coronavirus lockdown, would allow those who use taxpayer-identification numbers to be eligible for direct cash assistance, paving the way for illegal aliens who don’t have Social Security numbers to be eligible for the $1,200 checks.

(Related: Navarro On $3 Trillion Relief Bill: “Pelosi Basically Lost Me With That Package When She Has $1200 Checks For Illegal Immigrants”)

Pelosi said that a University “put out statistics months ago about how many people would still be alive if the science was followed”, though she did not refer to the “science” projected by Dr. Anthony Fauci or Dr. Deborah Birx, who had said in March that they predicted between 100,000 and 200,000 deaths in the U.S. A slide presented at the press conference showed as many as 240,000 deaths.

“As sobering a number as that is, we should be prepared for it,” said Dr. Fauci in March, who also sits on the Coronavirus Task Force. “It will be difficult, not one is denying that we are going through a really difficult time right now.” Continued Below

“This is a tragedy beyond words,” Pelosi said. “What the president did, showed yes, in those comments, showed his contempt– contempt for the American people and their health, contempt for science, contempt for any real effort to crush the virus, contempt for his supporters, their children, their parents. He hid the facts and refused to take the threat seriously, leaving the entire country exposed and unprepared.”

Pelosi was referring to comments made by the president–released recordings of Bob Woodward’s interviews with President Trump, in which the president was heard saying that he did not want to create panic across the country. However, the House Speaker left out the fact that the president held daily coronavirus take force briefings at the White House with scientists for transparency and to keep American’s informed.

“He didn’t want to cause a panic,” Pelosi said. “Why? [Be]cause of the stock market? Nobody wants to cause a panic. You want to show leadership, show a strategic plan, following the science, allocating the resources in order to get the job done. Even now, he refuses to listen to science, which is just a tragedy.” Video Below

While President Trump was leading the nation and responsibly keeping the entire country from panicking, his administration was acting decisively to save lives, instituting unprecedented travel restrictions, overhauling the testing system, and ramping up production and purchasing of critical supplies like PPE and ventilators, reports the Trump campaign.

.@SpeakerPelosi on President Trump: "His delay, denial and distortion of what was happening has caused many deaths."

Meanwhile, here’s what we found:

Pelosi did not mention that on February 28, Joe Biden said, “It’s not a time to panic about Coronavirus.”

During the State of the Union address in February, the Commander in Chief discussed the coronavirus; Pelosi ripped up the president’s speech:

Pelosi did not mention that Democrats were more concerned about impeaching President Trump last year and in January and February when the coronavirus began to spread globally.

When coronavirus was raging across China the Democrats were doing this crap pic.twitter.com/3HAVmDecyZ

Never Forget that on January 28th, both Tucker Carlson and Senator Tom Cotton were questioning why Democrats and the Media were focusing on Impeachment instead of Coronavirus.

Pelosi also did not mention that Democrats downplayed the virus themselves:

We leave you with Karl Rove who fact checked Joe Biden and his campaign surrounding the pandemic:

You don’t want to miss @SeanHannity’s segment with @KarlRove. Thank you! pic.twitter.com/579SrlBxyP