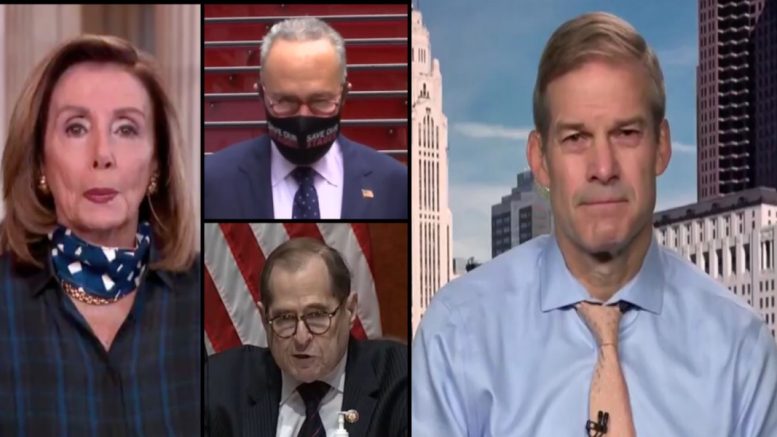 Senate Majority Leader Mitch McConnell (R-KY) issued a statement on Friday evening following the death of Justice Ruth Bader Ginsburg, and vowed that Republicans will move to fill the Supreme Court vacancy. “President Trump’s nominee will receive a vote on the floor of the United States Senate,” McConnell said.

Senate Minority Leader Chuck Schumer (D-NY) tweeted in response to Justice Ginsberg’s passing: “The American people should have a voice in the selection of their next Supreme Court Justice. Therefore, this vacancy should not be filled until we have a new president.”

Rep. Jim Jordan reacted, telling Baritiromo, “They’re criticizing the president for following the law, following the Constitution. The president’s job is to nominate someone for the Supreme Court, and it’s the Senate’s job to advise and consent, and go through the process.”

“But only once out of 8 times has someone, when there’s a difference in who has the White House and who has control of the Senate, only 1 in 8 times when someone’s been brought forward in an election year,” Rep. Jordan pointed out. Continued Below

“What’s most important to me is someone who is going to follow the Constitution. Understand where we’re at right now. I mean, think about what we’ve seen in the last 6 months. Democrat governors, Democrat mayors have said you can’t go to church, … work, … school, but you can protest, riot, and loot. So there’s been all kinds of limits on your fundamental liberties, your fundamental rights. We need someone on the court who will respect those liberties, who understands how important the Bill of Rights and the Constitution really are. That to me is what is most important,” he explained.

“I hope we put people on the court in the [Antonin] Scalia, [Samuel] Alito, [Clarence] Thomas, [Neil] Gorsuch, [Brett] Kavanaugh mold, and frankly, not in the John Roberts mold. I hope that’s what happens. But we should move forward with this. I think it should happen as quickly as possible,” Rep. Jordan added. Continued Below

During a Sunday interview on ABC News’ “This Week,” House Speaker Nancy Pelosi (D-CA) did not rule out “impeachment” as an option to halt the Commander in Chief’s U.S. Supreme Court pick from being confirmed, saying Democrats have “options” and will “use every arrow in our quiver” to block the eventual nominee before the November election.

Rep. Jordan responded to Pelosi and Democrats’ intimidation strategy, saying, “I don’t think the American people like to be threatened. I mean, Jerry Nadler said if you move forward with this nomination and the Senate is won by the Democrats in the election, that they’re gonna pack the court, add 6 new seats to the court and take it from 9 to 15.”

(Related: Democrats Threaten Repercussions If Republicans Confirm A SCOTUS Nominee Before The Election)

“Pelosi said today she’s gonna go with impeachment if they move forward. I don’t think the American people like being threatened. I think they like the president of the United States following the law and putting someone on that court who is going to respect the Constitution,” he added, later in the interview. Video Below

Rep. Jim Jordan on filling the vacancy at the SCOTUS:

Schumer – “Nothing is off the table.”

The Left has lost it. Follow the law and #FillTheSeat

#FillTheSeat. RT to pass it on.

(Related: Dems Introduce A Resolution Calling For The Impeachment Of AG Barr, Jordan Reacts: “Are You Kidding Me?”)