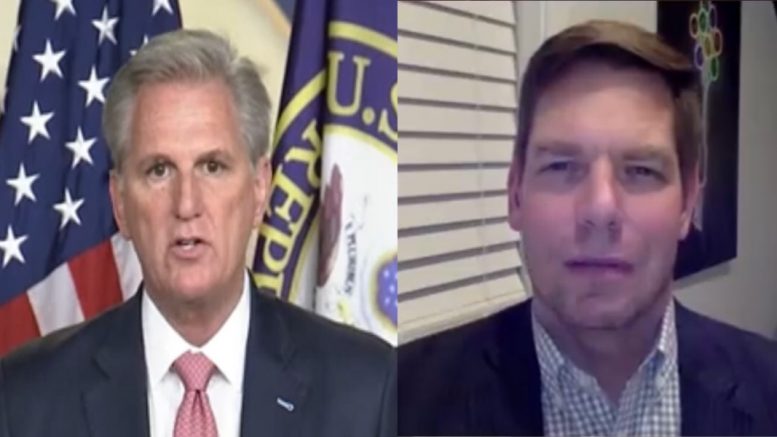 House Minority Leader Kevin McCarthy (R-CA) filed a resolution Thursday to remove Rep. Eric Swalwell (D-CA) from the House Intelligence Committee following reports that he may have been compromised by a suspected Chinese Communist Party spy.

McCarthy’s resolution comes after House Speaker Nancy Pelosi (D-CA) reappointed Swalwell to the House Intelligence Committee, and after he had reported last week that he would “offer a resolution to remove him”.

According to a report by Axios that was released in December, Rep. Eric Swalwell, who is a member of the House Intelligence Committee, was targeted by a Chinese national named Fang Fang — aka Christina Fang — an alleged operative for China’s Ministry of State Security, which is the country’s intelligence organization, as reported by The Freedom Times.

When pressed by Politico to comment on the report from Axios, Swalwell said he is convinced that then-President Trump is behind the timing of the report’s release, and he suspects it was done to hurt him politically in retaliation for his criticism and actions taken against the President, reported The Freedom Times.

“I’ve been a critic of the president. I’ve spoken out against him. I was on both committees that worked to impeach him. The timing feels like that should be looked at,” Swalwell told Politico.

I have filed a resolution to remove Rep. Eric Swalwell from the House Intelligence Committee.

Swalwell engaged in a years-long relationship with a suspected Chinese spy, and his conduct makes clear he has no place serving on the committee in charge of America's top secrets. pic.twitter.com/8Tb9TOh976

McCarthy’s resolution also cites the House rule that “A Member… of the House shall behave at all times in a manner that shall reflect creditably on the House.”

The House minority leader in December called for Swalwell to be “removed from Congress”, suggesting he is “a national security liability” following the allegations that he was involved with a suspected Chinese spy.

“Remember what Swalwell said: He accused the president of everything that he did by lying to the American public and sitting on the Intel Committee. Not only should he be removed from the intel, he should be removed from Congress as well. … And when did Adam Schiff know and when did the Speaker know? The Speaker appoints the Democrats in that committee,” McCarthy told Laura Ingraham in December. Continued Below

Both McCarthy and Pelosi received a briefing in December from the FBI in regards to Swalwell’s relationship with an alleged Chinese spy.

Meanwhile the Democrat congressman tweeted in response to McCarthy’s resolution on Thursday, accusing the GOP leader of “the New McCarthyism.”

“Meet the New McCarthyism. Multiple sentences in resolution state ‘Swalwell has not denied…,'” Swalwell tweeted. “Yet fails to include multiple FBI statements of ‘no wrongdoing’ and did nothing but ‘cooperate.’ All of this to deflect from @GOPLeader’s support for QAnon.”

Meet the New McCarthyism. Multiple sentences in resolution state “Swalwell has not denied…” Yet fails to include multiple FBI statements of “no wrongdoing” and did nothing but “cooperate.” All of this to deflect from @GOPLeader’s support for QAnon. https://t.co/2bsU72ev8H

You are required to disclose relationships with foreign nationals in Section 19 of the SF-86 form for a security clearance in the private sector.

Given the nature of Swalwell's relationship with a reported Chinese spy, he wouldn't qualify. Why is he still on the Intel Committee? pic.twitter.com/zRjlf7j3E4