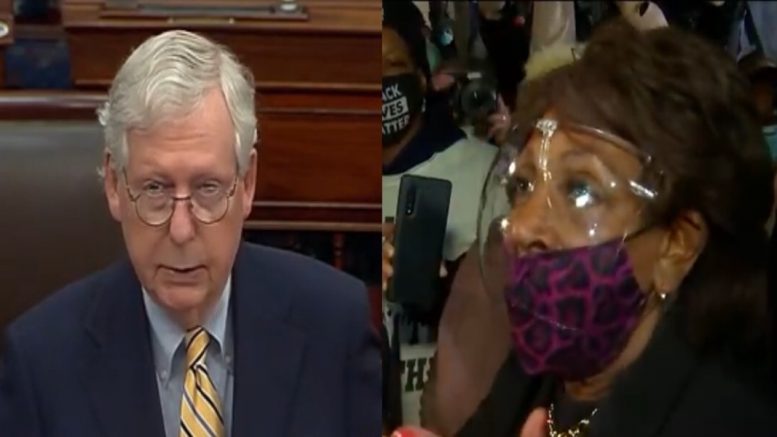 Senate Minority Leader Mitch McConnell (R-KY) broke his silence over remarks made by Rep. Maxine Waters (D-CA), who had crossed state lines to gather with protesters in Brooklyn Center, Minnesota on Saturday evening, urging demonstrators to “stay on the street”, “fight for justice”, and “get more confrontational” if former police officer Derek Chauvin is acquitted in his trial.

Senator McConnell said that last summer’s demonstrations “devolved into violent and destructive riots” after George Floyd died. “Small businesses were looted, civic monuments were defaced, and government buildings attacked. Not just insults, but rocks and Molotov cocktails were thrown at the good men and women of law enforcement,” he said.

“These were efforts to use violence and disorder as a political tactic to influence or overrule our democratic processes and our justice system,” the Senate minority leader suggested.

“Now over the last few weeks, many outlets turn to center stage with the police trial of the police officer who is accused of killing George Floyd last May. Again, the causes of civil rights and equal justice and the rule of law tell us that this trial and every trial must go forward without social pressure, political considerations, and certainly violent threats playing in a role,” he stated.

“Every single American deserves a fair trial,” Senator McConnell said. “This is sacred. You do not balance the scales of justice by trying to tip them. And yet, this past weekend, one Democratic House member from from California took it upon herself to visit the protesters in Minneapolis.” Continued Below

“It’s harder to imagine anything more inappropriate than a member of Congress flying in from California to inform local leaders, not so subtly, that this defendant had better be found guilty or else there will be big trouble in the streets,” he said.

“Again so much of our nation’s quest for civil rights and equal justice has been the fight to get rid of extra judicial violence, to get rid rigged trials, where the outcome was molded by public sentiment or angry mobs. It’s beyond the pale for a sitting member the United States Congress to look at what happened last summer and imply there should be some kind of a sequel, a sequel, if a legal case did not unfold as she thinks it should,” Senator McConnell expressed. Video Below

“Let’s hope it doesn’t take an injury or a fatality to remind politicians that their words actually have consequences. Earlier this year of course, the country heard many strong opinions from Democrats about whether leaders bear responsibility when reckless words precede criminal violence. Instead of trying to tilt the scales with threats, policy makers should focus on actually making policy,” Mr. McConnell urged.

Democrats filibustered the bill because it wasn’t anti-police enough.

(Related: McCarthy Warns Pelosi: If You Don’t Act Against Rep. Waters’ “Dangerous Rhetoric,” I Will Bring Action This Week)