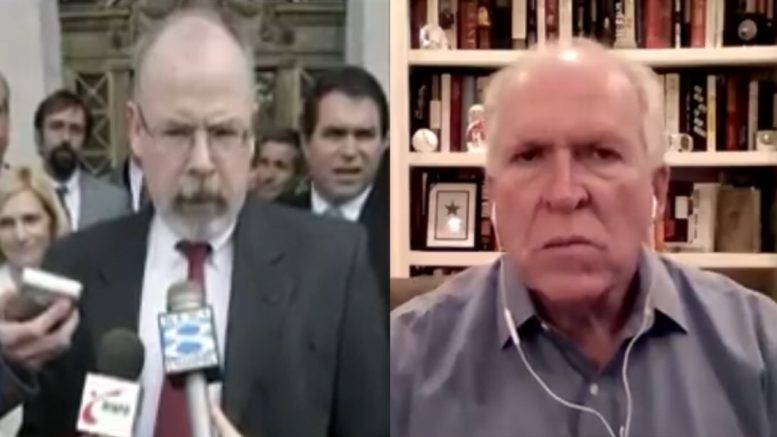 Friday on MSNBC’s “All In With Chris Hayes,” former CIA Director John Brennan said that he “welcomes the opportunity” to talk with U.S. Attorney John Durham’s investigators because he is confident that he has “nothing to hide”.

Host Chris Hayes told Brennan that he seems to one of the “targets” and that the Trump administration seems convinced that he is “engaged in wrongdoing or wants to get back at for unsubstantiated reasons”.

“Do you have personal experience of that? Do you personally worry that’s the case?” Hayes asked Brennan.

“It is clear that I am in their crosshairs,” Brennan said. “Ever since Donald Trump was inaugurated, I have spoken out against what I think has been the corruption, incompetence, the mischaracterizations that he and individuals around him have made to the American public. And I will continue to speak out.”

“I’d like to think that John Durham and the other DOJ and FBI investigators will continue to honor their oath of office and to carry out their responsibilities without any consideration of political interests of Donald Trump. And so, I feel very good that my tenure at CIA and my time at the White House during the Obama administration was not– that I was not engaged in any type of wrongdoing or activities, that cause me to worry about what this investigation may uncover,” Brennan said. Continued Below

(Related: Brennan Vents His Frustration After President Trump Hints ‘More To Come,’: “History Will Be Written By The Righteous, Not By His Lickspittle”)

“So, I welcome the opportunity to talk with the investigators. I have nothing to hide,” Brennan claimed. “I have not yet been interviewed by any of those individuals involved in this matter, but I’m willing to do so.”

“Because I do believe that, for too long, the American public had been misled by Donald Trump, by William Barr, and others. And so, I look forward to the day when the truth is going to come out and the individuals who have mischaracterized what has happened in the past will be shown to have deceived the American people,” he alleged. Video Below

In October, Swamp Drain reported that John Durham’s ongoing probe into potential FBI and Justice Department misconduct in the run-up to the 2016 election through the spring of 2017 transitioned into a full-fledged criminal investigation.