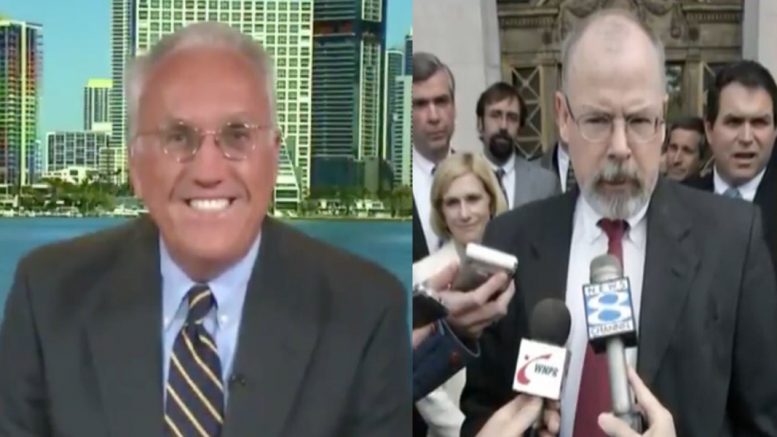 Meadows’ comments on the Durham probe follow Attorney General Bill Barr’s comments to Fox News last month that Durham’s findings have been “very troubling” and that familiar names are currently being probed.

“I think the American people are expecting indictments,” Mark Meadows told Maria Bartiromo on Sunday. “I expect indictments based on the evidence I’ve seen. Lindsey Graham did a good job in getting that out. We know that they not only knew that there wasn’t a case, but they continued to investigate and spy.”

“And yes, I use the word spy on Trump campaign officials and actually even doing things when this president was sworn in,” Meadows continued. “And after that and doing in an inappropriate manner, you’re going to see a couple of other documents come out in the coming days that will suggest that not only was the campaign spied on, but the FBI did not act appropriately as they were investigating. It’s all starting to come unraveled. And I tell you, it’s time that people go to jail and people are indicted.”

Additionally, former U.S. Attorney Guy Lewis weighed in on Monday, predicting to Fox News’ Harris Faulkner on “Outnumbered Overtime”: “I think we will see in the next 30 days, federal criminal indictments coming out of the Durham investigation.”

“I think it will be an overarching conspiracy that charges obstruction of justice; it charges false information to the FISA court, false information in the course of the investigation, and frankly, I think you’re gonna see as has been suggested by the attorney general, charges relating to illegal spying during the course of the Trump campaign,” Lewis speculated. Continued Below

“Frankly, I think you’re gonna see– look, in my experience having done this almost 20 years as a prosecutor, and now almost 20 years as a defense lawyer, I’ve never seen anything like it,” he expressed. “Truly. And I’ve handled– was participating in one of the largest espionage investigations here in the country. … This is gonna be something that we’ve never seen before”.

On Friday, Republicans on the Senate Judiciary Committee released newly declassified documents that they say “significantly undercut” the “reliability” of the infamous Steele dossier from the Russia probe, as well as the accuracy and reliability of the factual assertions in the FISA warrants against Page. Video Below

Two years ago I was one of four witnesses who testified behind close doors about FISA abuse to the house oversight committee in front of Mark Meadows and John Ratcliff. Very sensitive testimony. It’s time 🇺🇸

The Justice Department’s (DOJ’s) watchdog has identified critical errors in every FBI wiretap application that it audited as part of the fallout from the bureau’s heavily flawed investigation into former Trump adviser Carter Page, who was surveilled during the campaign in part because of a largely discredited dossier funded by the Hillary Clinton campaign and the Democratic National Committee (DNC).

Additionally, an ex-FBI lawyer in that case even falsified a CIA email submitted to the Foreign Intelligence Surveillance Act (FISA) court in order to make Page’s communications with Russians appear nefarious, the DOJ inspector general found. The FBI lawyer, Kevin Clinesmith, was allegedly told by the CIA that Page had reported his Russian contacts and was essentially acting as an informant — only for Clinesmith to allegedly omit that exculpatory information in a surveillance warrant application that framed Page’s communications with Russians as a sign that he was a secret foreign agent.